Grace to you and peace from God our Father and the Lord Jesus Christ.

I dug up just a couple of Kindle deals; I’ll check again first thing to see if I can find some more.

“I wore braces as a kid. My upper teeth benefited: they run a reasonably straight line, with equal spacing. My lower teeth didn’t: they run a jagged line, angling for space. Like my son, I pressed to get my braces off as soon as possible. I compounded that by wearing my retainer for a fraction of the time I was supposed to. The folly of youth. The folly of the short view.” There’s a moral to this story…

I always enjoy it when Andrea writes about her beloved Ben. “Ben has been at home, almost totally isolated, since early March. The first five months he was depressed and frustrated, but gradually he adjusted to the limitations and now cheerfully takes them in stride.”

AGTV exists to guard and proclaim the biblical gospel of Christ crucified, and to provide Christians and their local churches with resources to refute the errors of the “American Gospel.” At AGTV you have unlimited access to films and documentaries like American Gospel, Luther, Calvinist, Christianity Explored, and Epic. (Sponsored)

How Do I Know You?

Cindy Matson writes about typecasting. “Though it’s unfortunate for actors when they become so associated with one role that they find it difficult to get other work, it’s an even bigger travesty when we pigeonhole people for the wrong reasons. Paul calls this knowing them from a ‘worldly perspective’.”

A new Mars Rover is about to land on Mars and in this video, Mark Rober introduces us to it. (Note: He assumes a very old universe and evolutionary origin for life.)

Stephen Kneale writes about some of the struggles between Christians in deprived communities and those in middle class communities.

The Problem with the “Unencumbered Spiritual Self”

“Nearly four decades ago, Harvard law professor Michael Sandel described a certain view of humanity as ‘the unencumbered self.’ To be ‘unencumbered’ means our identity is not defined or limited by the fundamental relationships into which we are born or the network of relations we inherit. The unencumbered self is defined instead by the capacity to choose, and in an expressive individualist society, the choices we make regarding our future must arise from within. We look inside ourselves to define our identity and establish our destiny, not outside to any other source of authority or obligation.”

Flashback: How To Be Conformed to the World

Worldliness is like gravity, always there, always pushing down on you, always exerting its influence on you. As a Christian you are charged with resisting it day by day. You must and you can. 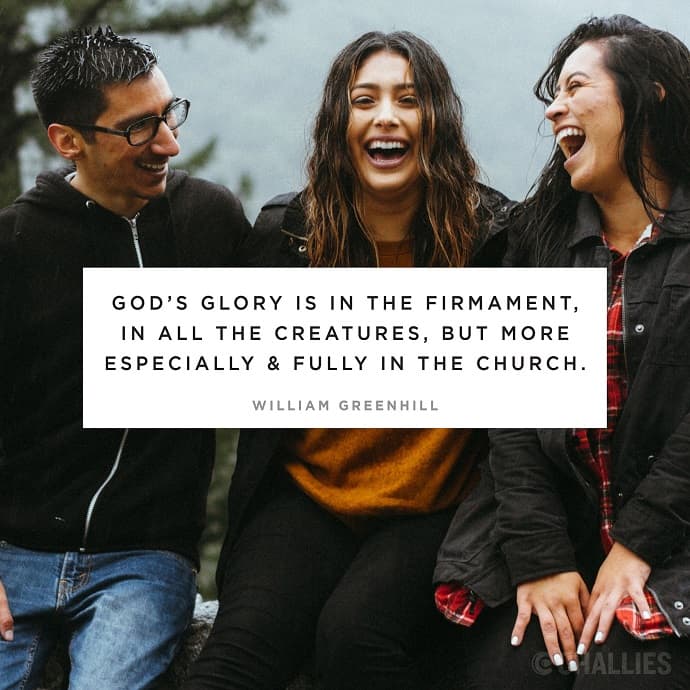 God’s glory is in the firmament, in all the creatures, but more especially and fully in the church. —William Greenhill