I’m often amazed at how much great material people willingly create and then release online for free. Today’s a good example of how different Christians use their gifts and explore their interests to bless people like you and me through their blogs. I’m grateful for each of them.

Serving Our Housebound Members for the Long Term

One unexpected benefit of the lockdowns is they gave us all a glimpse of what it means to be housebound. Hopefully that will help us better server housebound church members in the future. In this article Stephen Kneale explains some of the changes they are making (or, perhaps better said, some of the measures they thought were temporary but which may now become permanent). “Lock down, for these folks, has been (literally) a God-send. They have been included in their church families in ways they haven’t been able for a long time and they have experienced a newfound understanding and empathy from those who previously had no idea (and, often, little concern) for what things were like week by week for them.” (Also read this similar article.)

Our Business is People

“I love books, but I need to remember that they are means, not ends. They are tremendous means, but, what I have often found myself doing is retreating into my books instead of doing the things that the books say.” I can identify with that temptation!

Your Defense Against Satan

Daniel Hyde: “As we turn again to Ephesians 6, Paul wants the pastor to see by faith what God sees in his people. He wants you, the people, to see yourselves for what you truly are: soldiers who’ve been enlisted in Christ’s army.”

Be Generous—Give People and Money

It’s often easier for churches to give away money than to give away members! “The death I saw before my eyes was manifold. People I really loved were really leaving: an elder, some deacons, several ministry leaders, family members, and good friends. For the foreseeable future, they would have that rush of excitement of starting something new. The following Sunday, we would be left understaffed with a smaller budget and a whole lot of lonely. More than that, we would never be the same. The old version of us was gone.”

The Mission Field I Never Expected

“The eye-wincing truth is that I had imagined my mission field might be a brothel of trafficked women or a schoolyard of African orphans. I thought the sacrifices would be more obvious and profiled and the yield (or harvest) that came from sleepless nights or leaving loved ones behind more tangible than they are. ‘Yes, I left my family and home comforts behind,’ I could imagine telling the breathless BBC correspondent, ‘but curing Ebola was worth it.’ Somehow, raising children with special needs doesn’t have quite the same ring to it.”

Those Who Grieve Need to Speak. Are You Ready to Listen?

Here’s Colin Smith on the challenge and blessing of comforting others. “There are two sides to weeping with those who weep. First, there must be brothers and sisters in Christ who are ready to listen. And second, the one who grieves must be ready to allow some brothers or sisters into their sorrow.”

“There is nothing wrong with a bit of nostalgia and being energized or moved by some piece of music, provided the context is not sinful. Still, when you put these things together with a Christian worship service or program, we must be careful to discern our emotions. I bring this up because sometimes we can be misled to think that we have had a time of worship, or that we have heard a great sermon, on the sole basis that it moved our affections.”

Flashback: The Message That Moved the SBC

WA Criswell’s message, Whether We Live or Die, put the nail in the coffin of liberalism within the SBC and cemented the direction of the convention for many years to come. 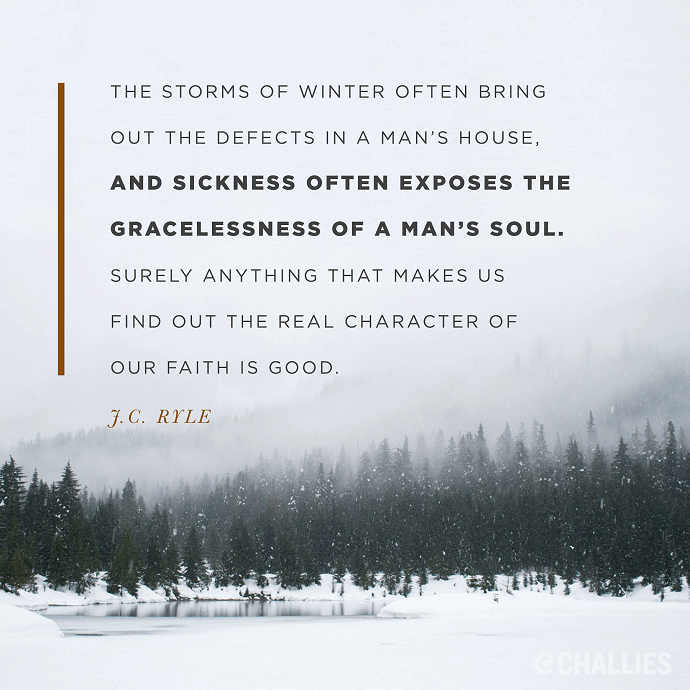 The storms of winter often bring out the defects in a man’s house, and sickness often exposes the gracelessness of a man’s soul. Surely anything that makes us find out the real character of our faith is good. —J.C. Ryle