The God of love and peace be with you today!

There is quite a nice little collection of Kindle deals to explore.

The Equality Act and the Rise of the Anti-Theological State

This seems like an especially important one from Al Mohler, at least for those of you who live in the US of A. “The passage of the Equality Act would mean the death of religious liberty. It would force all religious institutions and citizens to prove to the government’s satisfaction that their convictions merit constitutional protection.”

10 Things You Should Know about Shared Church Leadership

This is a fascinating (and tragic) historical discovery. “After remaining interred for over a century in the Winterberg tunnel, the bodies of more than 270 German soldiers — once thought to be lost deep within the still-battle-scarred French landscape — have recently been discovered.”

“I’m not sure who said it but someone somewhere once said, ‘Jesus called Lazarus from the tomb by name lest all the dead arise!’ And I can imagine George Whitfield in my mind’s eye summoning his congregation to draw nigh unto him with almost a whisper saying with increasing intensity, ‘Yes, Lazarus was in the tomb for four days but he doesn’t smell nearly as bad as you!’ It must have been wonderful to sit under such godly expositors who could provide such rich and colorful applications with the power to cut to the quick and in an instant set our eye on Christ as the only hope.”

Hearty Laughter as an Act of Faith

I think this article about laughter draws out an important application. “A large part of my Christian repentance has been to stop focusing so much energy on people liking and praising me. And so, though I knew it may cause some to dismiss, mock, or avoid me, I embraced my laugh.”

Daniel Seabaugh has spent several years observing the elderly people in his life and has arrived at a number of principles to guide him toward aging well.

“Have you ever asked yourself a ‘what if’ question as you think about the unknowns of the future? What if we run out of money?… What if one of our children turns against God or dies of sickness?… What if we are attacked?… What if there is no fruit to our work? What if?…”

Flashback: When I Am God

Recently I took some time to think about how life changes when I am god. The results were not pretty. 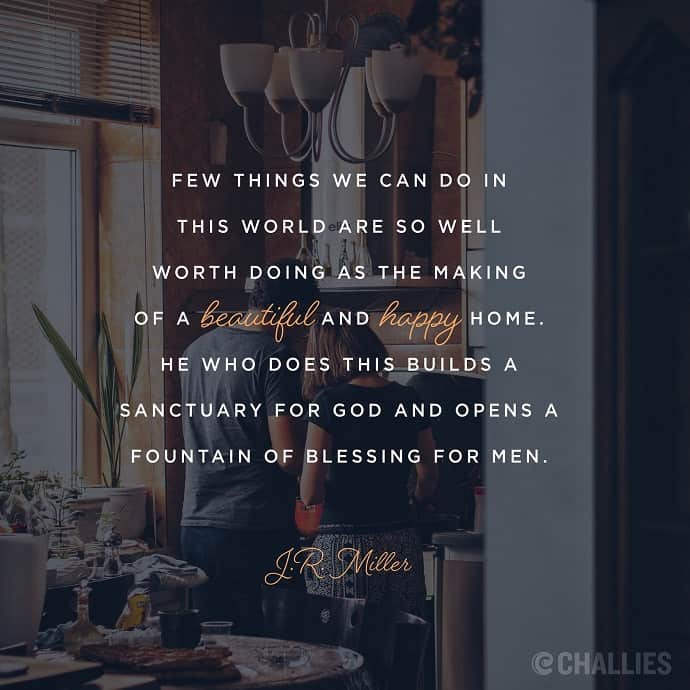 Few things we can do in this world are so well worth doing as the making of a beautiful and happy home. He who does this builds a sanctuary for God and opens a fountain of blessing for men. —J.R. Miller