Logos has the amazing NICOT and NICNT series at 40% off at the moment.

I still think the Circle device is a near-essential part of a family’s plan to protect their kids online. You can now get $40 off with the coupon code CIRCLE40.

Black Friday is coming up and, as is my custom, I’ll have an article that day highlighting the best of the deals for Christians. Stay tuned on Friday!

Can We Give Thanks for Flawed Heroes?

Why Are Pro-Choicers Bothered by Images of Aborted Clumps of Cells?

You can’t have it both ways! “One thing that convinces me that the pro-life position is true is, interestingly enough, the behavior of pro-choicers. Obviously, pro-lifers believe that abortion takes the lives of ‘precious unborn human persons.’ But ironically, the behavior of pro-choicers also reveals that, deep down, they also believe abortion takes the lives of innocent human persons.”

You’ll enjoy watching this short video that displays the incredible complexity (and design) of the hummingbird.

Carl Trueman: “Civic piety and Christian piety in the realm of sexual mores and identity are increasingly antithetical to each other. Not since perhaps the middle of the third century have those things that constitute good citizenship of the earthly and the heavenly cities been so difficult to reconcile. It is ironic, perhaps, that Fuller could be the seminary test case for this.”

They See You When You’re Shopping

I was rather surprised to see how certain brands are engaging with their customers online.  “The screen is displaying technology from Powerfront. Through its flagship product, Inside, businesses — most of them luxury brands — can see, chat with and track online shoppers. The program allows Powerfront’s clients to treat shoppers as if they were in a bricks-and-mortar store.”

Bruce Ashford interacts with a book that has generated quite a lot of buzz. “The significance of Primal Screams is that Eberstadt provides a compelling account of the wider story of which identity politics is a part. Many commentators have described and/or criticized identity politics, but in my opinion, none have sufficiently located it in the broader narrative of the West’s shared life. In sum, she argues that there are many factors giving rise to identity politics—including the fact that real injustices have been committed against minorities—but none of those factors are more significant than the Sexual Revolution.”

As you battle sin, listen for God’s affirming voice and look for success. God is for you and loves to help you put your sin to death. It is his delight. He will speak peace to your soul. 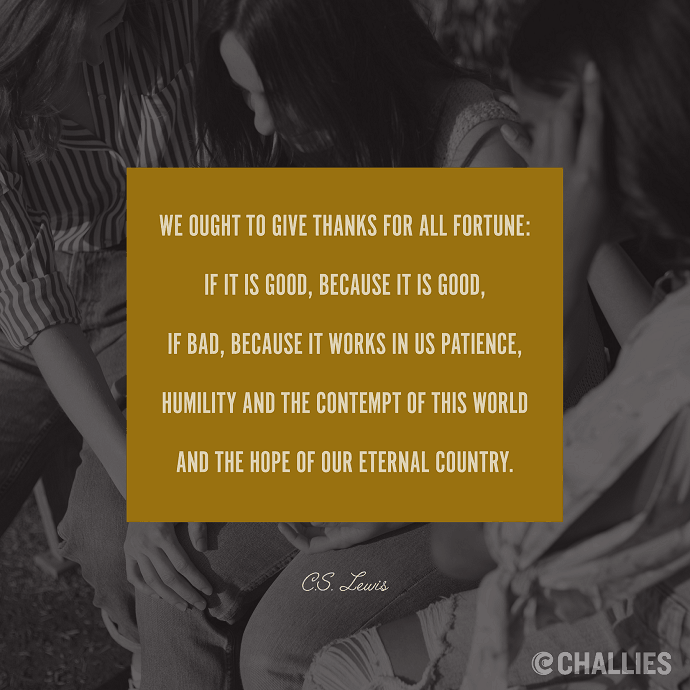 We ought to give thanks for all fortune: if it is good, because it is good, if bad, because it works in us patience, humility and the contempt of this world and the hope of our eternal country. —C.S. Lewis