There is a nice collection of Kindle deals to browse through today.

This coming Sunday I’ll be preaching at La Fuente Iglesia in Quito, Ecuador, then doing an Ask Me Anything session. The service begins at 4:30 PM. The preaching will be in both English and Spanish. If you’re in the area, I’d love to see you there.

A Case for Generosity

I’m very excited to hear there’s now a TGC Africa (which is not a subsidiary of TGC USA but has its own governing council made up entirely of African pastors). It’s this kind of material I’m especially interested in reading: “We need African Christians to write about African issues from a distinctly biblical point of view. There are many African issues, which are not sufficiently addressed in western media. Issues such as: HIV and AIDS, African Traditional Religion, persecution from Muslims and the huge growth of Islam in Africa, corruption, tribalism and colonialism in Africa, poverty, war, polygamy, male and female circumcision and more. Africans need to hear the voice of African pastors addressing these uniquely African issues from a biblical point of view.”

The Carbon Weight of the World

“There are almost 8 billion people alive today. This sounds like a lot, but how do we really weigh up in comparison to other living things?” When it comes to weight, we really don’t fare too well.

I enjoyed this reflection on work and passion and vocation. “Many low skilled, low paid workers, – many Christian workers – will never have the luxury of feeling angsty about putting too much meaning into their jobs, and risking their jobs becoming idols. Nor the guilt of having too many other luxuries afforded educated or highly skilled trades workers: status in our jobs; financial rewards that allow us to let off steam in Venice instead of the casino, that sort of thing.”

If you’d like to do some good reading, there’s a new edition of Credo magazine available for free online. This issue deals with holiness and includes a number of articles, interviews, and reviews.

She Will Be Saved through Childbearing

Here is Denny Burk’s take on a tricky text (for which there are varying interpretations). “In both 1 Timothy 2 and Titus 2, Paul declares that wives have a God-ordained role to play in caring for children and the home. This is not claiming that a woman must have children in order to be saved. It is not even teaching that a woman must be married to be saved. But for those women who are married, God assigns a special responsibility to care for the home.”

Do We Really Live Longer than Our Ancestors?

The answer is kind of surprising. “While medical advancements have improved many aspects of healthcare, the assumption that human life span has increased dramatically over centuries or millennia is misleading. Overall life expectancy, which is the statistic reflected in reports like those above, hasn’t increased so much because we’re living far longer than we used to as a species. It’s increased because more of us, as individuals, are making it that far.”

Flashback: Can We Enjoy Heaven Knowing Loved Ones Are In Hell?

Many we love today will have an eternal experience of pain, torment, and separation. How could we ever enjoy heaven if our loved ones are in hell? 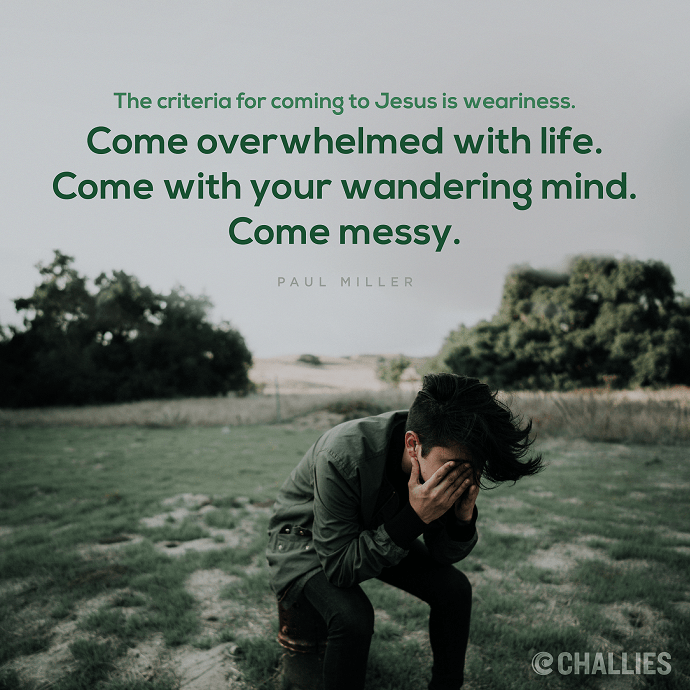 The criteria for coming to Jesus is weariness. Come overwhelmed with life. Come with your wandering mind. Come messy. —Paul Miller