There are some Kindle deals to look at today.

Remember that much of the content I write also goes out via podcast. You can get the info here.

(Yesterday on the blog: The Gospel-Driven Church)

Ordinary Christians Will End Abortion: Eight Ways You Can Help

The battle against abortion can, at times, seem unwinnable. “When the Romans would leave unwanted newborns out to die, it was the Christians who would rescue and raise them. May our history become our legacy.”

A Special Note from David Powlison

I’m sure you’re aware that David Powlison is battling cancer. He continues to provide updates and reflections on the CCEF site. They will help you pray for him, while also encouraging you.

Evangelism Is More Prayer Than Action for Protestant Churchgoers

Protestants believe in evangelism, but don’t practice it too well. “Most Protestant churchgoers say they are eager to talk to others about Jesus, and are praying for opportunities to share their faith. But most say they have not had any evangelistic conversations in the past six months.”

What About Capitalizing Pronouns Referring to God?

Randy Alcorn takes on the practice of capitalizing pronouns referring to God. “The old practice of capitalizing pronouns of deity has been done in very few Bible translations historically, and was abandoned by most Christian publishers years ago. I continued to do it for years but it created inconsistencies since I would capitalize pronouns of deity, then quote Scripture that didn’t. The inconsistency stood out. The only alternative would be to quote from NASB or NKJV, both of which capitalize pronouns of deity, but neither of which is my preference for purposes of clarity.”

I think this—selfless vs needless–is a helpful distinction. “Teaching that implies I ought to be needless saddles me with a burden I cannot bear and undermines my understanding of the gospel. Also, pursuing needlessness ironically sets us up for selfishness. Ask a woman over and over again to deny her God-given needs, and eventually she’ll run out of robot magic. Feeling tricked and worried she’s a failure, she’ll feel extra provoked to reach for selfishness in whatever form she can find it. The world will affirm this: ‘You deserve it.'”

And on the 7th Day, God Made Pastors Influencers

I’m not in the habit of linking to Vice (and don’t recommend much of what they do or write!). However, I think it’s noteworthy that they are writing about megachurches and their influential pastors. They draw out some interesting insights. “PreachersNSneakers brought the undercurrent of materialism in evangelical churches back into the public eye, and megachurch followers will continue to debate whether it’s appropriate for pastors to spend money on luxury goods. But perhaps good, tithing members of Hillsong and Zoe and Vous and Churchome should not only ask Do I want my preacher to be spending $5000 on Yeezys? but also Do I want my preacher to be doing stealth marketing for luxury brands every Sunday morning?”

This has become an undeniable and intimidating new feature of our society. “Such campaigns have become common. The emerging call-out culture in the U.S., Canada and elsewhere in the West bears more than a few similarities to China’s Cultural Revolution, in which writers, artists, doctors, scholars and other professionals were publicly denounced and forced by mobs to engage in ritual self-criticism. The goal is not to persuade or debate; it is to humiliate the target and intimidate everyone else. The ultimate objective is to destroy independent thought.”

Netflix’s goal is domination which makes it opposed to any form of moderation. We, on the other hand, must tenaciously hold to our conviction that work, not entertainment, is the purpose of life. Faith in Christ does not compel us to work so we can rest, but rest so we can work. 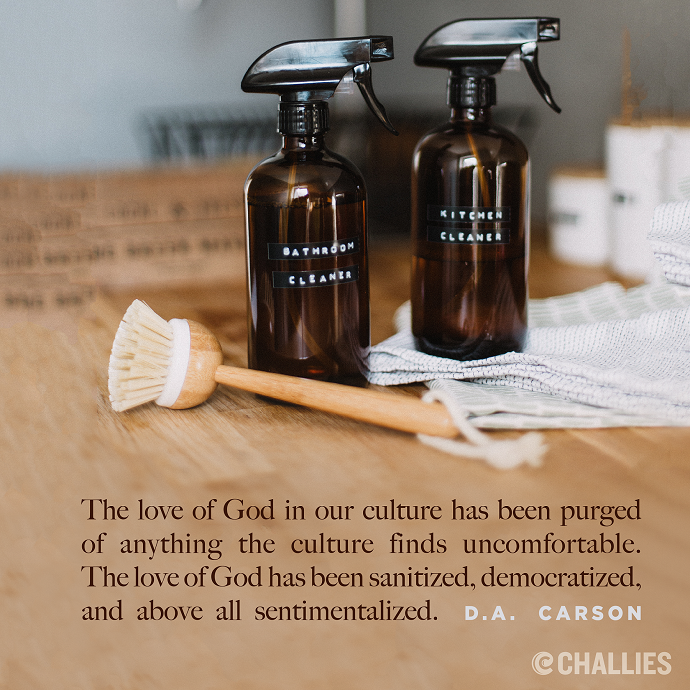 The love of God in our culture has been purged of anything the culture finds uncomfortable. The love of God has been sanitized, democratized, and above all sentimentalized. —D.A. Carson