This week marks the 150th anniversary of Hudson Taylor’s Brighton Beach experience. It was there and then that he made a decision that would forever shape church history. In honor of it, my friend Tim Keesee has prepared this excellent article. He also invites you to visit his site to watch a video clip from his film No Regrets, No Retreat.

One of my favorite quotes from Hudson Taylor, the very quotable pioneer missionary to China, is “There are three stages in every great work of God: first, it is impossible, then it is difficult, then it is done.” Taylor knew about impossible. Impossible was going to the other side of the world to untold millions who had yet to hear the Gospel even once. To do that would take months of risky sea passage to reach them, then learning their utterly confounding language, while facing diseases that if they didn’t kill you, then the people you were devoting your life to just might. On top of all that, to evangelize such a large country of large extremes, it would take an army of Cross-bearers. Impossible.

The second and third stages—difficult and done—are not reached by Samson-like strength or Job-like patience. Hudson Taylor would be the first to correct such thinking. He said, “All God’s giants have been weak men, who did great things for God because they reckoned on His being with them.” And, he added, “Perhaps the greatest hindrance to our work is our own imagined strength.” So the three stages are God’s work from man’s perspective: impossible—difficult—done. But the men and women witnessing this tide turn are not spectators or armchair critics—they are men and women of faith. Faith is not a warm, upward thought. Rather faith is action displayed and lived out in the arena of our days to the glory of God and the advance of His Gospel. Paul described his preaching, teaching, travel—and jail trips in between—as hard labor energized by God, “Struggling with all his energy that he powerfully works within me” (Colossians 1:29). Therefore, faith is speaking and writing for the sake of the Gospel. It is working and risking. It is winning and losing. It is going and not always returning. It is asking, seeking, and knocking. It’s what Jesus said “moves mountains.” 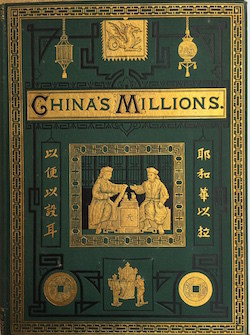 Reaching vast China with the Gospel at a time when it was closed, dangerous, and distant was never impossible for God. But who could believe this enough to follow Him and see Him work? Apparently hundreds—even thousands—could! One of the treasures I “unearthed” during the making of the most recent film in the Dispatches from the Front series, No Regrets, No Retreat, was a pristine, original edition of China Inland Mission’s annual report from 1888. China’s Millions was a year’s compilation of journal entries and reports from Hudson Taylor and his fellow missionaries. The pages recount the baptisms and the beatings, riots and new arrivals. But the most striking page in the book for me was one that resembled a high school yearbook—only older in every way. Row upon sepia-tinted row of pictures of the 100 missionaries who had left for China the previous year.

Look into their faces. Look beyond the stiff, monochrome formality of the photography, and see their faces blush with life. I wish I could talk with them, hear their voices, ask them where they came from and what happened after they reached the other side of the world. When these men and women set out for China, they must have parted from their families with kisses and tears, but also with the joy that rushes the heart when Jesus is near. They crossed the world to tell people about their Friend and Saviour. They crossed the world, but some never re-crossed it. For them, missionary service was a one-way ticket. Of course, cross-bearing is a one-way ticket, too.

Still, more and more would follow; and whether through a lifetime of faithful ministry or through the witness of an untimely grave, the Gospel advanced deep into unreached China. God was moving them from the impossible, through the difficult, but they would not see it done, because God had a bigger plan. Hudson Taylor with Gospel-rooted vision and methods wrote in 1873:

The work . . . is steadily growing and spreading—especially in that most important department, native help. The helpers themselves need much help, much care and instruction; but they are growing more and more efficient as well as more numerous; and the future hope of China doubtless lies in them. I look on all us foreign missionaries as platform work round a rising building; the sooner it can be dispensed with the better; or rather, the sooner it can be transferred to other places, to serve the same temporary purpose . . . and the better for the places yet to be evangelized.

The “building” Taylor referred to would rise far beyond what anyone at the time could think possible. Today there is a vast army of Chinese believers—60-80 million by conservative estimates. That’s not to say Gospel work is done in China. Hardly. Every generation must reach its own generation. Yet, despite the political, religious, ethnic, and geographic barriers in China, the Gospel continues to advance from the teeming coastal cities and westward to the walls of the Himalayas and beyond. No great walls and no great armies can stop Christ from building His Church! The impossible is now being done all over China.

But what about today? Where does Gospel advance appear really impossible? This isn’t about our willpower. It’s about God’s power—and the faith in action to believe and follow Him. Yet, as His servants, we so often see only the bricks and barbed wire, the risks and unfavorable statistics. And so, we settle for what we can see and find comfort in the shadow of the wall—never seeing God shake Jericho or move mountains!