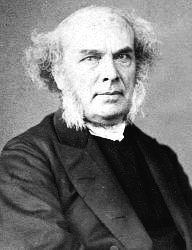 Horatius Bonar was born in 1808 in Edinburgh, Scotland, the son of a ruling elder in the Church of Scotland. After a relatively uneventful upbringing, Bonar entered into the ministry himself, becoming pastor of the North Parish in the rural town of Kelso.

Not long after he entered the ministry there was a disruption in the Church of Scotland that resulted in the withdrawal of 451 ministers from the Established church, among whom were Bonar and a number of his friends. Together they formed The Free Church of Scotland.

Bonar spent the next 20 years pastoring the congregation in Kelso, writing, and engaging in evangelism. Throughout his life he had been strongly influenced by Thomas Chalmers, and in 1866 he planted a new church in his home city of Edinburgh: the Chalmers Memorial Chapel. He was to serve that church until the year before his death in 1889.

In Bonar’s day the Scottish church had no substantial library of hymns since they sang metrical Psalms almost exclusively. Bonar had begun to write hymns before his ordination when he was serving as superintendent of a Sunday school. He found that the youth had little love for either the words or the tunes they were singing, so he set out to write a few hymns with simpler lyrics and already familiar tunes. These hymns were received wonderfully.

It wasn’t long after this that Bonar, apparently having a gift and an interest in writing verse, took to writing adult hymns. This continued as a habit while he served as pastor, and in the course of his ministry he published a number of hymn compilations.

“I Heard the Voice of Jesus Say” was one of the hymns he wrote during his tenure at Kelso. This is perhaps his most famous song, having found good reception not only in Scotland but also in the wider English-speaking world.

What makes the hymn so widely appealing may well be its focus on the gospel call of Christ to come to him, look to him, drink, and rest, and the simple call to obey and to find in him all that he has promised. It is simple, sweet and encouraging.

I heard the voice of Jesus say, “Come unto Me and rest;
Lay down, thou weary one, lay down Thy head upon My breast.”
I came to Jesus as I was, weary and worn and sad;
I found in Him a resting place, and He has made me glad.

I heard the voice of Jesus say, “Behold, I freely give
The living water; thirsty one, stoop down, and drink, and live.”
I came to Jesus, and I drank of that life giving stream;
My thirst was quenched, my soul revived, and now I live in Him.

I heard the voice of Jesus say, “I am this dark world’s Light;
Look unto Me, thy morn shall rise, and all thy day be bright.”
I looked to Jesus, and I found in Him my Star, my Sun;
And in that light of life I’ll walk, till traveling days are done.