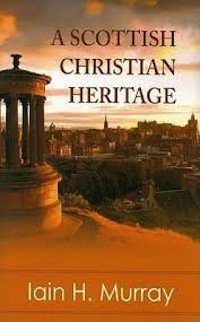 Buy from Amazon Buy from WTS Bookstore
On the face of it, or judging by the title, A Scottish Christian Heritage

does not sound like the kind of book many people would enjoy. It sounds like a book that will dwell on a narrow topic and one that will be of interest to only a select group of people. But those of us who appreciate the writing ministry of Iain Murray know that what he writes is always worth reading.

The last few years have seen the publication of several books defending the view that, for a country of its size, Scotland has had an inordinate influence on history and, thus, on the world as we know it today (and I believe the most popular of these has been this

title). The Scots are a remarkable people and one that has surely had a great influence on Reformed Christianity. Yet, while this book praises the rich Christian heritage of Scotland, it is not a praise of Scotland as such. “These pages are not principally about books. The theme is rather people and movements; yet the books from those times bring the abiding spiritual lessons to us and prevent the history becoming an exercise in nostalgia.”

The book is divided into three parts. In the first, Murray writes brief biographies of several great Scottish Christians–John Knox, Robert Bruce, Thomas Chalmers, John MacDonald and Horatius Bonar. He looks at their lives and then, similar to what John Piper does in his “The Swans are not Silent” series, reflects on their contributions to the church or on lessons we can draw from their lives. He examines their lives thematically, showing where each of them was used by God to lead and strengthen the church.

In the second part he writes about Scottish missionaries, initially discussing the missionary spirit that arose from within Scotland and then pausing to focus on Robert Moffat, the great missionary to South Africa. There are two predominant lessons in this section: first that a missionary spirit arises first in the lives of individual men and women and that its strength will always correspond with the strength of their spiritual stature; and second that a missionary spirit is founded on the basis of biblical truth.

The book’s third part covers church issues and begins with a look at Scottish churches and Christian unity in Scottish church history. Though I am not a preacher, the chapter on “Scottish Preaching” was, strangely enough, probably my favorite. The chapter begins with a discussion of some of the criticisms of Scottish preaching–primarily that it was known for being strong in doctrine but weak in feelings and affections. This leads Murray into a fascinating look at expository preaching and the benefits and drawbacks of this method of preaching. While Murray deserves to be heard on just about any issue he decides to write about, it seems that his encyclopedic knowledge of church history should lead us to listen to what he says on this topic in particular. He concludes that exposition in a consecutive series is a great model, but one that may not fit the abilities of every preacher (with Charles Spurgeon standing as an obvious example of one who felt he would not be able to be effective with this format). Murray deals with both the pros and cons of this model of preaching. This chapter alone made the book seem a treasure to me.

The book’s final two chapters discuss the Scottish view of the eldership and the tragedy that was the Free Church of Scotland and their descent into liberalism.

No chapter in this book is without some application to the contemporary church. In many ways these glimpses at Scotland’s contribution to the church serve as a jumping-off point for the discussion of a variety of issues facing the church today. Through an examination of Scotland’s great preachers and missionaries, and through the discussion of issues faced by this nation’s churches, we get a glimpse of the blessings and failings of the church of our day. The old adage says that “those who forget history are doomed to repeat it.” These words are true, for by looking to the lessons of history, we educate ourselves and prepare ourselves for the trials we face today. In A Scottish Christian Heritage Iain Murray has done a masterful job of informing and edifying the church by drawing lessons from the history of just one small but influential nation. I recommend this book for any Christian, but particularly those in positions of leadership.