On August 3, 2016, Emirates airlines flight 521 crashed at Dubai International Airport. The pilots had just set down the plane when they received a warning that they had landed too late—they would run out of runway before the plane could come to a safe stop. They initiated the go-around procedure which would allow them to lift off, circle the airport, and try again. The plane rose off the runway and began to climb, but then suddenly sank back down and crashed into the ground. It skidded for 800 meters before coming to rest. The crew took immediate action and, remarkably, all 300 people safely evacuated the plane before it was consumed by flames.

Had you been an onlooker watching the evacuation, you would have noticed a troubling phenomenon. Many of the people pouring out of that plane and sliding down the emergency chutes were clutching bags and suitcases. A video taken aboard the plane shows the immediate aftermath of the crash and in the chaos passengers are seen opening the overhead luggage compartments and hauling down their luggage. Seconds later, as they exit the plane, flight attendants are yelling, “Leave your bags behind!” Yet photographs show dazed passengers wandering the tarmac with their bags in tow.

Flight 521 is not the only time this phenomenon has been observed. Photographs of the evacuation of a Cathay Pacific plane show passengers sliding down the chute with bags over their arms and shoulders. When Asiana flight 214 crashed in San Francisco, a number of passengers were photographed walking away from the burning wreckage clutching their suitcases. A police officer who arrived at the scene had to stop others from climbing back into the plane to retrieve their belongings. British Airways 2276 in Las Vegas and U.S. Airways 1702 continue to prove the pattern.

It hardly needs to be said that grabbing your suitcase during an evacuation is a bad idea. It may even be a deadly idea. To take your suitcase is bad for you and everyone around you. It blocks the aisle as you reach overhead to retrieve it, it slows you down as you make your way to and through the exit, it becomes a dangerous object hurtling down the evacuation slide. In a situation in which every second counts, a suitcase is a dangerous impediment that can kill you and the people around you. And still people can’t bear to be without them. A study by the National Transportation Safety Board found that almost half of passengers attempt to retrieve their bags during an emergency evacuation and that they do so primarily to secure their cash and credit cards. It’s ridiculous, isn’t it?

As I see those photographs and watch those videos, I can’t help but be reminded of a Bible verse: “Therefore, since we are surrounded by so great a cloud of witnesses, let us also lay aside every weight, and sin which clings so closely, and let us run with endurance the race that is set before us” (Hebrews 12:1). The author of this letter compares the Christian life to a race and warns us that if we are going to run that race well, if we are to run it with endurance and make it to the end, we will need to get rid of every possible hindrance. We must get rid of everything that will slow us down, drag us down, keep us down. Kent Hughes says, “A hindrance is something, otherwise good, that weighs you down spiritually. It could be a friendship, an association, an event, a place, a habit, a pleasure, an entertainment, an honor. But if this otherwise good thing drags you down, you must strip it away.”

A suitcase is a perfectly good thing that may just kill you in an emergency evacuation. It is a perfectly good thing, but it isn’t good enough to risk your life for. And our lives are full of good things that may just slow us down, that may just hinder us from matters that are far more important—matters of eternal consequence. If you’re on a plane that is broken and burning, the best thing you can do is lay aside every weight and every hindrance so you can focus on just getting to safety. This is what’s best for you and what’s best for the people around you. And in a world that is broken and burning, it is even more important to lay aside every possible hindrance, to do it for the good of your own soul and the good of those around you. 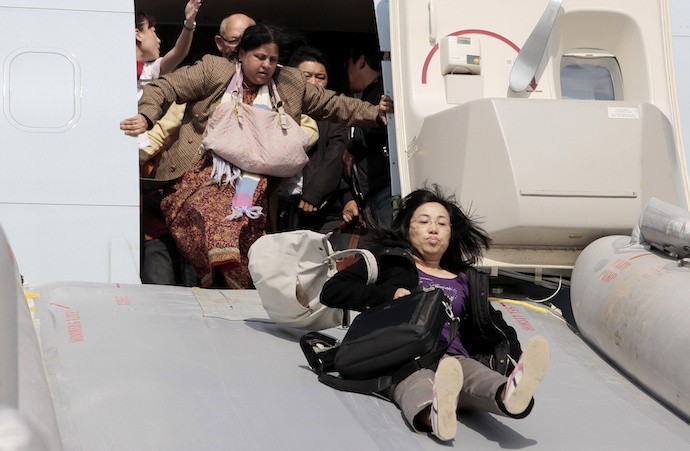