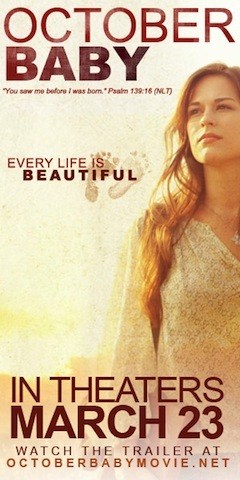 Hannah is in college when she receives the shocking news her parents hadn’t ever shared with her—she is adopted. Not only is she adopted, but she is the survivor of a failed abortion. Angry, confused and upset, she turns to her oldest friend Jason to help her through this difficult time. Along with his friends she embarks on a Spring Break road trip that leads her to go looking for her roots. That’s the plot of October Baby, a feature film set to hit theaters in March, and one inspired by the story of Gianna Jessen, an abortion survivor and advocate for the pro-life cause.

I received a screener of the film and was pleasantly surprised by it—pleasantly surprised by how much I enjoyed it. Admittedly I love a good, heart-warming kind of story, but October Baby offers more than that. The acting is very good and Rachel Hendrix, who plays Hannah, does a fantastic job in a tough role. The more difficult and emotional the scene, the more she shines.

The message of the film is explicitly pro-life. It is pro-life in the big picture, telling the story of an ambitious, enjoyable, lovable character who is alive only because an attempt to murder her failed. It is pro-life in the details as well, such as when a nurse describes that failed abortion, contrasting Hannah with her brother who did not survive. It is also pro-adoption, highlighting the joy and value of adoption. “Thank you for wanting me,” says the main character in a particularly emotional scene. To be wanted, to be loved—don’t be surprised if you find your eyes filling with tears.

With all of those positives—and again, October Baby truly is an enjoyable film—it also highlights some of the weaknesses I almost always find in Christian movies, and even good Christian movies.

Christian films too often seem to find themselves in a place of limbo, somewhere between moralism and preachiness, between downplaying or assuming the gospel by saying too little and appearing preachy by emphasizing or over-emphasizing the gospel. If a film only vaguely references faith—a Scripture passage here, the obligatory church scene there—we will complain that it says too little. If a film explicitly references the gospel—the whole gospel—we will say that it is too preachy.

You probably won’t be surprised to hear that while October Baby shares a good and powerful message, it comes perilously close to moralism by only vaguely referencing the gospel.

The spiritual climax of October Baby comes when Hannah wanders into a grand Roman Catholic cathedral. Prior to this we have vague notions that she may hold to some kind of Christian, Evangelical conviction (she’s a virgin, after all), but now, as her spiritual quest continues, she wanders into this cathedral and has a conversation with a priest—the film’s voice of wisdom and godliness. She says that she is Baptist and he laughs that she would actually think that this matters. With tears in her eyes Hannah confesses hatred for herself and hatred for others. She is full of despair and anger and guilt, and it all comes pouring out of her. The priest listens attentively and then he speaks:

Because we have been forgiven by God, we should forgive each other. In Christ you are forgiven, and because you are forgiven, you have the power to forgive, to choose to forgive. Let it go. Hatred is a burden you no longer need to carry. Only in forgiveness can you be free, Hannah—forgiveness that is well beyond your grasp, or mine, a forgiveness that you can’t find on a trip or even in this cathedral. But if the Son shall set you free, you will be free indeed.

That is the moment of spiritual transformation. Hannah is changed, she is now ready to accept who she is and to forgive those who have sinned against her. This is the moment in which her Christian faith is driven home deep into her heart.

It’s not that there is anything wrong in what the priest said to her, but more that it was incomplete, a kind of lowest common denominator homily compatible with Catholicism or Evangelicalism or probably Mormonism, for that (and, indeed, it is being screened in many Catholic churches). The implications of the gospel are made the gospel. Salvation is assumed, not presented or called for. Jesus is the man who is dead on the cross at the front of the church, not the risen Jesus who calls for every character and every viewer to turn to him in repentance and faith. What is it that he has forgiven us for? Why do we need forgiveness? How does a dead Savior forgive us for anything? The film calls for the person who has sinned or been sinned against to forgive herself and to forgive others as she has been forgiven. But it doesn’t say anything substantial about the nature of that forgiveness or the nature of the One who offers it.

But what is the alternative? I suppose the alternative is to go deeper, to explain that the gospel involves Christ trading our sin for his righteousness, to explain that we are dead in sin and destined for hell if we do not confess our sin and cast all our hope upon Christ. But if the film were to go in that direction, wouldn’t it appear preachy? Wouldn’t we then accuse the filmmakers of going too far?

It is a difficult conundrum. There must be a way that a film can speak truth (and avoid doing it from the mouth of a priest whose doctrine necessarily denies salvation by grace through faith alone, but perhaps that is a topic for another day) and yet speak that truth in such a way that we won’t roll our eyes and complain. Or maybe we want film to speak in a way that only our mouths are really equipped to speak. I wonder…