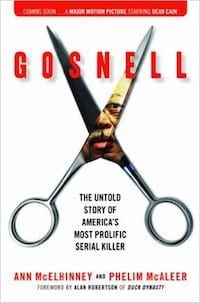 The grand jury report is as startling, as nauseating as any you’ll ever read. “This case is about a doctor who killed babies and endangered women. What we mean is that he regularly and illegally delivered live, viable babies in the third trimester of pregnancy—and then murdered these newborns by severing their spinal cords with scissors. The medical practice by which he carried out this business was a filthy fraud in which he overdosed his patients with dangerous drugs, spread venereal disease among them with infected instruments, perforated their wombs and bowels—and, on at least two occasions, caused their deaths.” The doctor was Kermit Gosnell and, justly, he is now in prison, charged with three counts of first degree murder, one count of involuntary manslaughter, and an extensive list of lesser crimes. His story is told by Ann McElhinney and Philem McAleer in their book Gosnell: The Untold Story of America’s Most Prolific Serial Killer.

As vile as the grand jury report is, it hardly does justice to the reality. Gosnell ran a Philadelphia abortion clinic that specialized in low-income and immigrant clientele. Over twenty years he carried out countless thousands of abortions but did so in conditions that were nothing short of appalling. A former employee once filed a report with authorities that described some of the most startling violations:

Choung described how Gosnell had untrained workers performing specialized medical work. She included herself in this group. Uneducated, semiliterate workers were administering anesthesia and doing ultrasounds; the clinic was filthy, and two flea-infested cats roamed the procedure rooms, where Gosnell would eat sandwiches. The clinic reused single-use medical equipment. An autoclave sterilizer for abortion instruments didn’t work properly, and a worker who had AIDs hand-washed the instruments. Gosnell would sometimes have a bowl of cereal as he was performing an abortion.

There is more. He performed abortions on children who had been dragged in against their will. He kept jars of baby feet on his shelves. He performed abortions far beyond the limitations of the law. What he did was despicable and unconscionable. Yet for years, authorities did nothing. In fact, on a number of occasions they described his practice as clean, suitable, and up-to-code. It was only after he was found to be running an opiates mill that the authorities were finally forced to act. Gosnell’s practice was shut down and he was jailed. But by then he had stolen thousands or tens of thousands of lives.

Gosnell is a very difficult book to read, primarily because its subject is such a monstrous individual who did such harm to so many people. Yet I consider it an important book to read for a number of reasons.

First, it shows that the medical system will protect those who are engaged in abortion. It must do this, because it cannot allow people to see and know the true horror of abortion. Thus inspectors and administrators who ought to have shut down the clinic and bring charges against Gosnell refused to do so. They even protected him, despite his gross violations of medical standards and ethics.

Second, it shows that the judicial system will also protect abortion and abortionists. It must do this, too, to guard the myth that abortion is harmless and good. The initial judge in Gosnell’s case even “ensured that the grand jury report was written in a way so that it did not indict abortion alongside Gosnell and his associates.”

Third, it shows the complicity of mass media in abortion. Gosnell’s clinic and crimes should have been front page news across the city and the country. In reality, though, it received almost no attention in major media outlets. It was only popular outcry through new and alternate media that finally forced the hand of the mainstream media and brought it to national attention.

Fourth, it shows that people’s view of abortion varies with their understanding of its reality. The propaganda that abortion is merely the extraction of a bit of tissue cannot withstand any serious scrutiny. In Gosnell’s case, members of the jury were forced to endure a grueling trial in which they were confronted with the reality of abortion. Many of them found their understanding of abortion and its morality substantially altered. Many who began the case as ardent supporters of abortion left far less convinced.

In these ways and more, Gosnell is an important book and one you may do well to read.

When Americans were first battling to secure the right to abortion, many Christians offered a solemn warning: To devalue life in the womb is to devalue life everywhere. To permit abortion is to introduce into society a culture of death that will inevitably lead to much wider destruction. Never has this been so clearly seen as in the scandal of Kermit Gosnell.