In 1969 Leonard Cohen released a record entitled Songs From A Room. The fifth track on that album is “Seems So Long Ago, Nancy.” The song has become one of Cohen’s more popular ones; it has found its way onto one of his live albums and has been covered by several other artists. It is a dark, haunting song that speaks of a young woman named Nancy. The poetic words are difficult to interpret, leading many fans of Cohen’s music to speculate on what they mean.

Over the years Cohen has made several references to the song during concerts and in interviews. Fans once speculated that the song was written as a tribute to Marilyn Monroe, but Cohen replied “No, it was about a real Nancy.” In his introduction to Frankfurt72 Cohen said “This is a song for a girl named Nancy who was a real girl—who went into the bathroom of her father’s house, took her brother’s shotgun and blew her head off. Age of 21. Maybe this is an arrogant thing to say, but maybe she did it because there weren’t enough people saying what I’ve been saying.” “In the song book for the Songs of Love and Hate album, there is a description of a LC concert. LC is about to start singing ‘It Seems so Long Ago, Nancy,’ but he decides to talk about her first, to get in the mood. He says that she was not adjusted to life in this world. She had a baby and they took it away from her, and she shot herself.”

Over the years I have had a fascination with this song. It is an awful song, in many ways, leaving Nancy a legacy that few would want—a legacy of promiscuity and self-loathing. I have often felt such pity for Nancy as I can almost feel her sadness and pain through the song. I have wished that someone could reach through the sadness and bring her some measure of peace.

But the peace never came. Lost in her despair, Nancy took her own life.

How do I know this? Nancy was my aunt.

Perhaps this puts my fascination with this song into perspective. The song is not about some anonymous Nancy, but is about a woman I should have been able to know and love, but for the fact that she took her life before I was ever born.

At times in my life I have been nearly obsessed with finding out about her. Her name rarely comes up when the family comes together and it is as if the past is so painful to her siblings that they would rather not think about her at all than relive that pain. What follows represents the small amount I have learned about my aunt. 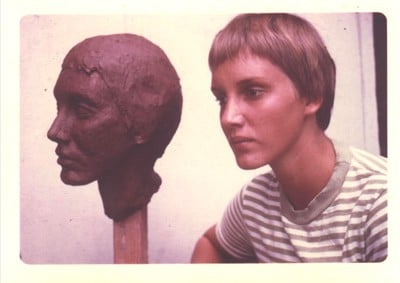 Nancy was born October 20, 1943 and died on March 10th of 1965, when she was only twenty-one years old. She was a troubled young woman, and spent many of her teenage years under psychiatric care. Several years ago, digging through some old papers at the family cottage, I found a few letters she had written to her mother from psyciatric hospitals. In some of these letters she seems to be doing well, thanking my grandmother for sending her clothes and saying “Next week seems so far away. I just hope I’ll be free soon.” In others she seems to be in times of torment, writing disjointed thoughts in scrawled handwriting. “A manic depressive just bombed in–And I mean bomb. Hell! She came 400 miles by ambulance in 4 hours. Imagine the ball she had eh? Well she’s great fun but really ‘hurt’ through behind her happy face. Don’t worry!”

There is a second series of letters, which pre-date the first by several years. In 1961 Nancy lived away from home, serving as a tour guide at historic Fort Henry in Kingston, Ontario, and she writes about dating boys from R.M.C. (Royal Military College) and visiting with aunts and other relatives, even travelling to New York to take in a Henry Fonda show and shop at Bloomingdales. “Don’t worry about me,” she wrote, “I know that I’m doing the right thing.”

My grandmother was a meticulous calendar-keeper and on December 20, 1963 she noted, “Nancy met Mike.” At some point in the following months Nancy became pregnant, and social conventions being what they were at the time, especially in a prominent family of Members of Parliament and Supreme Court Judges, Nancy was forced to give up her baby for adoption. Just a few months after the baby was born, Nancy, in a time of desperate depression, took her life with her brother’s gun. Her brother is my father. He was just fifteen.

Several months ago, in private correspondance with Leonard Cohen, he commented to me about Nancy and his memories of her. “It is her beauty and bravery that shine through. Many young women of the time came up against the hard limitations of family and society, although not every confrontation ended so sadly.” Cohen was not fast friends with Nancy, though he had met her many times through mutual friends. Their closest mutual friend was Morton Rosengarten, an artist and sculptor.

When I consider Nancy’s life, I can’t help but wonder if she had not found more than the hard limitations of family and society. My grandmother once shared with my mother that in the weeks before her death, Nancy would scream, “Mom, get me a guru! I need a guru!” Nancy seemed to know that her torment went deeper than societal conventions, touching even on the realm of the spiritual. She cried out for guidance; for help. But it would never come.

I wish I knew more about Nancy. I dream some day of finding and meeting her son (my cousin). I wonder if that would help bring a small measure of closure to what is a tragic story. Or perhaps it would merely bring unnecessary pain into his life. But perhaps the joy of knowing that some glimmer of good—a human life—came from the situation would bring some measure of comfort to those who still mourn Nancy, even after forty years.

A few years after Nancy took her life, my grandfather did the same.

Imagine the pain the family faced as they dealt with another suicide, another tragedy, another humiliation. He, too, dealt with tormentuous depression, anger and grief. When it came to be too much for him to handle, he took his life. Could a family get any lower? Imagine gathering at Christmas or Thanksgiving with two family members missing. Imagine the pain.

But at about the same time my grandfather took his life, something miraculous happened in that family. My father was given new life.

The Bible shares a story that speaks of a similar situation.

In John chapter eleven we read about a man named Lazarus, who was a close friend of Jesus. At one point Jesus received a messenger telling him that Lazarus was gravely ill and asking him to hurry to the town of Bethany to be with his friend. But by the time Jesus arrived, it was too late—Lazarus was dead and had been in the tomb for four days already. Imagine a four-day old corpse in the heat of the middle-east. The corpse would already have been decaying. When Jesus asked to see the body, Lazarus’ sister, Martha, said, “Lord, by this time there will be an odor, for he has been dead four days.” Martha knew what to expect of a man who was dead—he would be putrefying, causing an unbearable stench. She had a reasonable expectation of a dead man.

But Jesus did not, because he had something to teach them. He said to Martha, “I am the resurrection and the life. Whoever believes in me, though he die, yet shall he live, and everyone who lives and believes in me shall never die. Do you believe this?”

Jesus then went into that tomb and called “Lazarus, come out!” And just like that, life was breathed back into the dead man, and he walked out of the tomb, still bound in grave cloths. The power of God had breathed life into death. And that is what happened to my father. He did not experience physical death, but was spiritually as lost and dead as his sister had been. His spirit was as dead as Lazarus’ body. He was without a guru, without a teacher, without a God and without a hope. But then the power of God breathed life into him. My father was saved from the horror and despair that befell his sister and his father.

What is even more amazing is that this same life was breathed into Nancy’s sister (my aunt) and Nancy’s mother (my grandmother). They, too, were given life! That life has continued to bring joy and comfort to the family through the years. The words Jesus said to Lazarus are the same he says to you today. “I am the resurrection and the life. Whoever believes in me, though he die, yet shall he live, and everyone who lives and believes in me shall never die. Do you believe this?” Do you?

This article was enthusiastically received by Leonard Cohen’s fans who had long wanted to know more about the person behind the song. And over the years it has made its way to other people who have been able to fill in some of the gaps about Nancy’s life. Through a near-miraculous series of events, we found Mike and Nancy’s son, my cousin. He lives just a short distance from my home and has quickly become a part of our extended family.