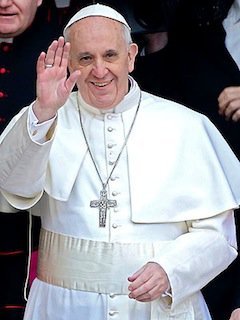 If you know anything at all about the new Pope, Pope Francis, you must know this: he is the humble Pope. From the day of his election he has been widely praised for his humility. A recent article from The Washington Post is representative, lauding him for his humble deeds.

Over the past two weeks, with one act of humility after another, Pope Francis has proven he’s willing to break with tradition. Just after being named the new pontiff, he asked the faithful to pray for him, rather than the other way around. He’s refused to stand on the customary platform above other archbishops and dressed himself in simpler vestments than his predecessors. He’s made a practice of shunning the rich trappings of the position, from paying his own hotel bill to opting out of the palatial apartment popes have lived in for a century in favor of simpler digs.

On Maundy Thursday it is traditional for the Pope to wash the feet of a dozen people. Where Popes have traditionally washed the feet of priests, Francis chose to wash the feet of twelve juvenile inmates. Such deeds are consistent with his legacy from Argentina where he was reputed to fly coach instead of first class and to ride public transit between home and office. These are the deeds that have proven so attractive and that stand in stark contrast to many of his predecessors.

What is humility? Humility, in the words of Wayne Mack, “consists in an attitude wherein we recognize our own insignificance and unworthiness before God and attribute to Him the supreme honor, praise, prerogatives, rights, privileges, worship, devotion, authority, submission, and obedience that He alone deserves. It also involves a natural, habitual tendency to think and behave in a manner that appropriately expresses this attitude.” Mack gets straight to the heart of humility when he shows that it is expressed before God before it is expressed before man. Humility before others must grow out of humility before God. If we are fundamentally proud before God, we simply cannot be humble before man.

Like any of us, Pope Francis can only be humble–truly humble–if he first attributes to God “the supreme honor, praise, prerogatives, rights, privileges, worship, devotion, authority, submission, and obedience that He alone deserves.” Yet Roman Catholic doctrine, and especially doctrine related to the papacy, steals from the honor, rights, prerogatives and authority of Jesus Christ and attributes them instead to the Pope. By definition and by Catholic dogma, Francis is no humble Pope.

The Vicar of Christ

According to the Catechism of the Roman Catholic Church, the most fundamental claim about the Pope is that he is the Vicar of Christ. “For the Roman Pontiff, by reason of his office as Vicar of Christ, and as pastor of the entire Church has full, supreme and universal power over the whole Church, a power which he can always exercise unhindered.” A vicar is a substitute (as we see in the word vicarious), which means, according to James White, that the Pope “functions in the place of Christ as the earthly head of the Church as Christ is the heavenly leader.” The Pope claims to be Christ’s representative on earth, left here to rule the Church. Yet this claim demeans the role of the Holy Spirit, for it is the Spirit to whom Christ has entrusted his church. As White says, “The truth of the matter is that the Holy Spirit’s role has been taken over by the hierarchy of the Church, and the individual Christian is subject to that authority as a matter of his eternal salvation.” Pope Francis proclaims that he is Christ’s Vicar on earth and that he, like Christ, has supreme and unhindered authority on earth.

The humble Pope must revoke his blasphemous claim to supremacy and instead direct people to the care of the Holy Spirit.

The Roman Catholic Church attributes infallibility, the impossibility of error, to the Pope “when, in the exercise of his office as shepherd and teacher of all Christians, in virtue of his supreme apostolic authority, he defines a doctrine concerning faith or morals to be held by the whole Church.” Essentially, this doctrine teaches that God has given us a spokesman on earth who can authoritatively and infallibly address the most difficult questions related to life and doctrine. While the specifics of papal infallibility are complex and debated, in any form it infringes upon the authority of the Bible. Again, James White explains: “Papal infallibility is really the capstone of the entire denial of sola scriptura. We are told we can find an infallible guide in the person of the Pope, one who can speak for the Church without question on matters of faith and morals. It is impossible not to point out the simple fact that in this doctrine one finds the final step in a process that began with the first addition of a human tradition to the Scriptures: the process of replacing the Holy Spirit of God with a structure of man’s making.” The claim of infallibility simply cannot be reconciled with the claim of humility.

The humble Pope must declare his own fallibility and instead call upon the church to examine in the light of God’s Word every word he speaks and every word his predecessors have already spoken.

The Upholder of Doctrine

Pope Francis is now the head of the Roman Catholic Church and, therefore, the supreme upholder of its doctrine. Yet this doctrine is fundamentally opposed to the gospel of grace alone by faith alone through Christ alone. The unbiblical doctrine that necessitated the Protestant Reformation has been affirmed and re-affirmed by Rome. Despite claims to the contrary, the Reformation is not over. The Catholic doctrine of justification is still one of faith plus works. Canon 9 of the Council of Trent has never been revoked and remains the Church’s position: “If any one saith, that by faith alone the impious is justified; in such wise as to mean, that nothing else is required to co-operate in order to the obtaining the grace of Justification, and that it is not in any way necessary, that he be prepared and disposed by the movement of his own will; let him be anathema.” This is just one of many anathemas that together claim that those who affirm justification by faith alone are placed under God’s curse and are subject to his wrath. Pope Francis is now the primary proclaimer and upholder of these anathemas.

The humble Pope must revoke the church’s anathemas against the doctrine of justification by faith alone and instead affirm what the Bible so clearly teaches to be true.

We admire those who do good things, who choose poverty instead of riches, who prefer prisoners to priests. Yet I am concerned that as Evangelicals we are already raising up this man as an example of the virtue of humility. I have shared just three of the claims of the papacy that come into sharp contrast with any claim to humility. We could point as well to his titles of Your Holiness, or Holy Father. We could point to the fact that he allows people to kiss his ring. Would you proclaim that your pastor is humble if he demanded or allowed such titles and such rituals? But ultimately, these are all subservient to the greatest and most blasphemous claim of Pope Francis and the Church he represents: that he is the Vicar of Christ. In the face of this claim, “Humble Pope” is an oxymoron.