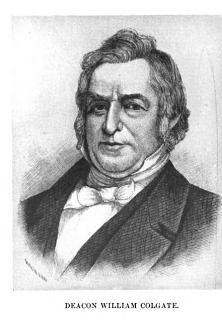 Our next Christian philanthropist, William Colgate, founded a company that has placed a well-known product in many of our homes even today—Colgate toothpaste. Born in Kent, England in 1783 to Robert and Sarah, Colgate migrated with his family to Maryland in 1798 because of his father’s political sympathy for the American War of Independence and the French Revolution.

While in Maryland, Colgate helped his father manufacture soap and candles, but it was after he moved to New York City in 1804 that he became an apprentice to a soap-maker and in this position learned the manufacturing business. In 1806 he founded his own starch, soap and candle business on Dutch Street in New York City, and this small shop eventually grew into a massive and thriving corporation. A skilled and principled businessman, Colgate would in due time become one of the wealthiest and most generous men in New York City.

In his early days Colgate attended a Presbyterian church pastored by Rev. Dr. Mason, one of the most prominent preachers in New York. In conjunction with his business success, Colgate was highly esteemed amongst the church members and he played an active part in the church. However, after corresponding with his Baptist father, Colgate came to reject infant baptism and, having done so, joined First Baptist Church of New York where Rev. William Parkinson baptized him in 1808. He remained an active, generous churchman throughout his life. He served as a deacon (he was affectionately known as Deacon Colgate) and became known not only for financial generosity, but also for faithfully serving the people of his church.

In 1811, Colgate married Mary Gilbert and together they had three sons, Robert, James and Samuel. Colgate eventually served on the Board of Managers of the American Bible Society (ABS) as its treasurer. Later, after dealing with controversial matters within the ABS, Colgate helped organize the American Bible Union in 1850, and again he served as the treasurer of that society until his death.

Beside serving the Bible societies, Colgate also supported Hamilton Literary and Theological Institution (later Madison University and Theological Seminary). Likewise, he regularly gave to the Baptist Missionary Union, and he even fully funded a foreign missionary on his own. Colgate made financial provisions for his aging parents by purchasing a farmhouse in a neighboring county, and he supported them financially the rest of their lives. Because of his kind and generous personality (along with Mary’s congenial spirit), his home was known as an especially pleasant and welcoming place to be. Throughout his life, Colgate attributed his success in business and ministry to the principles and truths taught in the Bible.

In 1857, Colgate died at the age of 74 and his son Samuel succeeded him as President of Colgate & Company and for a time it remained a family business; in 1928 the company was sold to Palmolive-Peet to become the Colgate-Palmolive-Peet Company (though Peet was subsequently dropped). As long as the family was involved in the business, they maintained the founder’s spirit of generosity. Samuel and James were both benefactors of Madison University and Theological Seminary. Because of the family’s great financial support, the school was renamed Colgate University in 1890, seven decades after the Colgate family initially got involved with the institution.