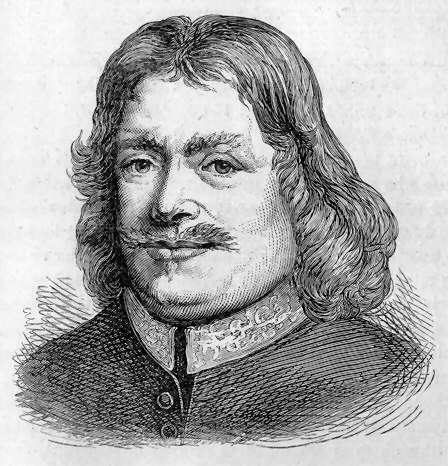 John Bunyan, author of The Pilgrim’s Progress and undoubtedly the most famous of all Puritans, was born on November 28, 1628 in Bedfordshire, England. His father was a brazier (a brass worker) and it was intention that his son would take over the family business. But in 1644, when he was 16, both his mother and sister passed away. Within two months his father remarried, and Bunyan soon left to join the Parliamentary Army.

After two and a half years in the army, Bunyan returned home to take up the work of a tinker (an itinerant metalworker). Before long he was married, and his new wife brought into the relationship two books God used to convict him of his sin: The Plain Man’s Pathway to Heaven by Arthur Dent and The Practice of Piety by Lewis Bayly. Bunyan stopped his swearing, which must have been a particular vice of his, and took up regular attendance at a church.

Through the influence of some godly women in the church, the preaching of pastor John Gifford, and the writing of Martin Luther (especially his commentary on Galatians), Bunyan came to a real and saving knowledge of Jesus Christ and was baptized in 1653.

Before long Bunyan began preaching in small circles and discovered his gift for teaching. Soon he was formally appointed as a lay preacher and began preaching more regularly. Around the same time he published his first work, Some Gospel Truths Opened, written in opposition to the teaching of the Quakers, and thus began what would become his most fruitful and enduring ministry: writing books.

His first wife passed away in 1655 leaving him four children, the oldest of whom, Mary, was blind from birth. Bunyan married again in 1659 to Elizabeth who would bear him two more children.

Bunyan was arrested in 1660 for preaching without a license. As the story goes, when told that he would be freed if he stopped preaching, he responded, “If I am freed today, I will preach tomorrow.” Bunyan would spend the next twelve and a half years behind bars for this conviction, supporting his family by making countless shoelaces for them to sell.

After his release from jail in 1672, Bunyan became pastor of the nonconformist congregation of Bedford from which he staged a wider ministry throughout England. During this time he earned the playful title “Bishop Bunyan.” During another brief stint in jail in 1675 Bunyan wrote his most remembered title, The Pilgrim’s Progress, which he then published in 1678.

In 1688, while in London on a preaching trip, Bunyan was overtaken with fever and died on August 31. He was 59.

Perhaps the most remarkable thing about John Bunyan was his unusual ability to preach and teach. It is recorded that King Charles II once asked John Owen why he listened to Bunyan, an uneducated tinker, to which Owen replied, “Could I possess the tinker’s abilities for preaching, please your Majesty, I would gladly relinquish all my learning.”

However, his abilities were not limited to the spoken word, but instead were perhaps all the more effective in what he wrote. J. I. Packer notes that over the course of his 30 year writing career Bunyan published a total of 60 works, and he adds, “they are all worth reading still,” though none of them are as accessible as The Pilgrim’s Progress.

The incredible success of The Pilgrim’s Progress is a testimony to Bunyan’s ability to teach, in this case through an allegorical narrative. Beeke & Pederson observe that, as some scholars have asserted, “with the exception of the Bible and perhaps Thomas a Kempis’s The Imitation of Christ, this Bunyan classic has sold more copies than any other book ever written.”

Obviously his most important work, and the one every Christian should at least try to read, is The Pilgrim’s Progress. In Meet the Puritans Beeke and Pederson say it is “The best of Bunyan and a perfect pictorial index to the Puritan understanding of the Christian life.”

Grace Abounding to the Chief of Sinners – “An indispensable source for Bunyan’s early life and conversion, this autobiographical classic chronicles his life from infancy to his imprisonment in 1660.”

The Holy War – Another allegory by Bunyan, considered second only in quality to The Pilgrim’s Progress. It “is more difficult to read but is also more profound in places … because it involves several levels of allegory.”