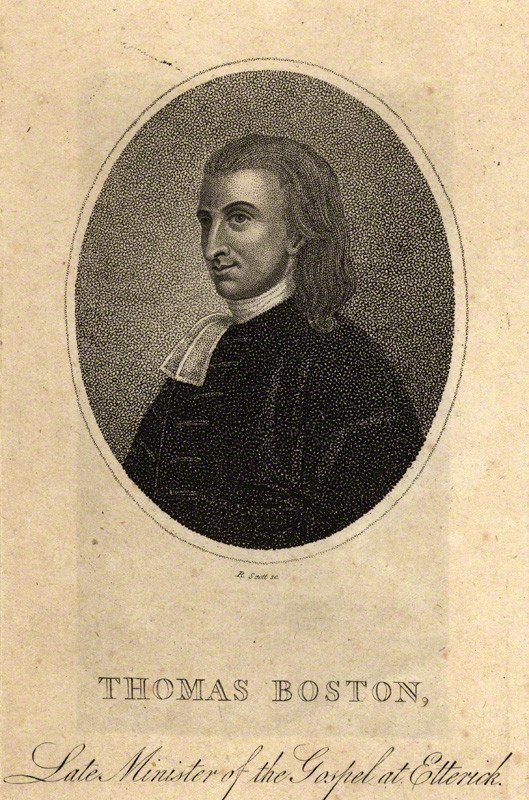 Thomas Boston might not technically count as a Puritan in the minds of some, either because he was Scottish or because he lived the majority of his life in the eighteenth century. J. I. Packer, however, includes him in his book Puritan Portraits and describes him as one who, alongside Jonathan Edwards in America, “represents most brilliantly the prolonging into the eighteenth century of pure Puritanism” (106). He was an “inheritor and champion of Puritan theology and of the Reformational rethinking that preceded it.”

Boston was born in Duns, Scotland in 1676, the son of good Presbyterian parents. Once as a child he even accompanied his father to jail because of his father’s lack of conformity to the established church. Boston’s own conversion to Christ came at the young age of 11 as he sat under the preaching ministry of Henry Erskine.

By the age of 22 he was a licensed preacher in the Church of Scotland and already writing books. In 1707 he took up the pastorate in the southern Scottish town of Ettrick, where he would remain up to the point of his death in 1732 at age 56.

What is most remarkable about Boston is the unique combination of so many graces in one man. Packer again helps us understand his significance by describing him as one who had

… a dazzling mastery of the text and teaching of the Bible; a profound knowledge of the human heart; great thoroughness and clarity in exposition; great skill in applicatory searching of the conscience; and a pervasive sense of the wonder and glory of God’s grace in Christ to such perverse sinners as ourselves. (117)

Elsewhere he writes that, “as Boston had a sensitive spirit, so he had a first-class mind, a retentive memory, and a way with words.” Jonathan Edwards also regarded him highly, calling him “a truly great divine.”

The Art of Man-Fishing – Remarkably written when Boston was just 22, this book represents well the Puritan understanding of evangelism–what Christ meant when he spoke of fishing for men, and how we can follow him in that work.

The Crook in the Lot – Derived from seven sermons which he preached during a period of great pain in his own life, this book contains Boston’s meditations on God’s sovereignty and wisdom in placing thorns in your side (or, as the title says, crooks in the lot of your life).

Repentance – In this book Boston “links together expositions … on the necessity, nature and urgency of repentance, and the folly of ignoring or postponing this life-and-death issue.”