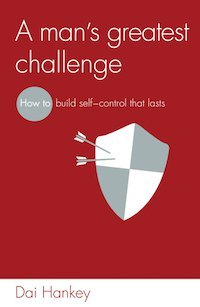 What is a man’s greatest challenge? Of all the virtues described in the Bible, which is the one that causes men the most pronounced struggle as they seek to exemplify it? Many will be tempted to look straight to sexual purity and the allure of sexual sin, but in his book A Man’s Greatest Challenge Dai Hankey looks at another virtue: Self-control. I am inclined to agree with him. I have often described self-control as “the lost virtue” and can think of no other book that deals with that virtue and nothing else. Here is what Hankey says:

The battle for self-control has been the greatest challenge of my life. The faces of the issues I have sought to gain control over may have changed over the years, but the roots have remained and the struggle has never subsided. Looking back, my deepest regrets have come from losing control in one way or another. And my greatest frustrations have come from believing that I’d finally conquered certain sins, only to find my self-control failing as I messed up once again.

Perhaps you can identify. Perhaps you have a history of blowing up in anger, or drinking to excess, or being unable and unwilling to look up from your mobile phone, or dedicating so much time and attention to online pornography. The specifics may change, but the heart of it is the same: a lack of self-control. Says Hankey, “I want to tell you that building a life of lasting self-control is possible, though it is a challenge that requires honesty, sweat, tears, humility and faith. I’m praying that the gospel truths in this book would change your life as you read it as much as they have changed mine as I’ve written it.”

A Man’s Greatest Challenge uses an extended metaphor to instruct the reader about self-control. The author looks to the Old Testament and the many kings who were instructed by God to build walls around their cities. These walls functioned like self-control functions in our lives, keeping the enemy at bay. When the walls fell or when the walls were untended, the enemy was quick to take advantage. King Solomon himself said, “Like a city whose walls are broken down is a man who lacks self-control” (Prov 25:28).

This metaphor extends through the book, and Hankey invests a great deal of effort in properly equipping the reader to understand self-control. There are no quick-fixes here. While the book is practical and provides clear and specific guidance on self-control, it first takes long looks at building a plan of action, understand the consequences of past sin, rightly putting sin to death, and laying a proper foundation through identifying with Christ. With these building blocks in place, he is finally able to instruct the reader in putting on the great virtue of self-control.

Written with winsome honesty and refreshing candor, this is a book that will benefit any man who chooses to read it.

A Man’s Greatest Challenge is available at Amazon or from The Good Book Company.