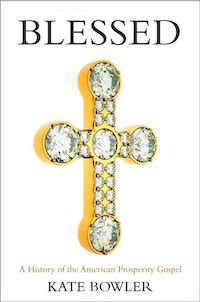 The United States has a dominant economy and is a powerhouse for exporting goods to other nations. What is America’s most significant export? Answers vary by time and criteria, but most experts point to products related to food or to petroleum. Across all categories, more than $2 trillion in goods and services are sold to foreign businesses each year. But I can’t help but wonder whether history will show that America’s most prominent export in this period of history was not goods or services at all, but a movement most commonly called the prosperity gospel. This movement is the subject of the book Blessed, a fascinating history of America’s prosperity gospel.

“The movement goes by different names,” says Kate Bowler, “ranging from the slightly pejorative (Health and Wealth or Name It and Claim It) to the vaguely descriptive (Faith or Word of Faith) to the blunt shorthand, the prosperity gospel. Though it is hard to describe, it is easy to find.” This movement that began in America—and could only have begun in America—rapidly spread across the world so that today it is the dominant expression of Christianity in nations stretching across the globe. To many of its adherents, it is Christianity. Bowler’s purpose in writing about it is to “show how millions of American Christians came to see money, health, and good fortune as divine.” To do this she follows three lines of argumentation. First, she introduces many of the major figures and features from the movement’s slow but sure development in the twentieth century. Then she shows how the prosperity gospel represents not merely a theological movement but a “transformation of popular religious imagination that has not yet ended.” Finally, she attempts to point out the major themes of the prosperity gospel movement.

It is these themes that receive the bulk of her attention, and she hones in on four of them: faith, wealth, health, and victory.

Blessed is a fascinating book that both traces the development of the prosperity gospel and describes its current state. And while Bowler is analytical and dispassionate, her observations and experiences aptly display the full horror of this false gospel. She can’t help but show how it misuses scripture, how it sanctifies greed, how it benefits the few at the cost of the many, how it offers only sorrow to those who do not grow rich or who do not maintain health. At the same time, she insists it is not merely the desire for health and riches that motivates its followers. “On one level, the appeal of prosperity theology is obvious. The faith movement sells a compelling bill of goods: God, wealth, and a healthy body to enjoy it. But it is the enjoyment, the feelings that lift believers’ chins and square their shoulders, that is its fundamental achievement.” Its chief allure, she insists, is its simple optimism.

This ugly movement uses what is visible to both quantify and qualify the invisible. It substitutes what is material for what is spiritual, what is lasting for what is fleeting, what is holy for what is profane. It creates its own metrics (wealth and health) and then uses them as the sure measure of a person’s faith and as the means to guarantee a successful life. In this way and so many others it radically overturns orthodox Christianity (which is to say, Christianity drawn faithfully and carefully from the pages of holy scripture). In this way it is nothing less than a false gospel that must be rebuked and repudiated.