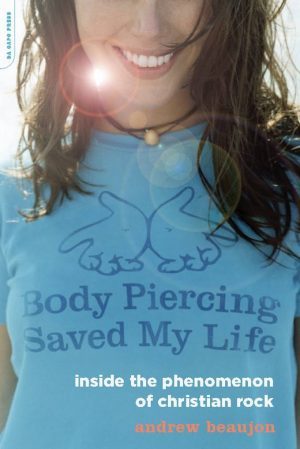 Andrew Beaujon has a strange fascination with Christian music; though he is not a Christian, he enjoys listening to this music and has spent a great deal of time seeking to trace its history and to understand the genre and the subculture it has inspired. Body Piercing Saved My Life is the result of his investigation. The book’s title is inspired by a t-shirt he saw at Cornerstone Festival, which showed a picture of Jesus’ nail-pierced hands and that same slogan “body piercing saved my life.”

This book was developed from a series of articles published in Spin magazine, to which Beaujon is a contributor. It takes a behind-the-scenes look at an industry that most of us know little about. He takes a look into the subculture and attempts to truly understand it and to predict whether the success and popularity of Christian music is merely circumstantial, or if it is here to stay. Speaking of his unique perspective he writes, “There was the small matter of not being a Christian. It’s not that I’m a Jew or a Muslim or a Unitarian. In fact, I consider atheism to be too much of a commitment. Aside from an annually renewed belief that the Washington Redskins have a shot at the playoffs, I’m not religious, and I haven’t put in much time trying to work out whether I’m wrong, or maybe just lacking the right gene.” Despite being non-religious, he is respectful toward Christianity and seems to admire much of what it and its followers stand for. He is certainly not entirely antagonistic towards the faith.

He makes clear the purpose of the book. “This book…is about whether Christian music can figure out how to transform itself from being simply a lifestyle accessory to becoming an enduring part of American culture. The doors of the church are finally open to rock ‘n’ roll. But is Christian rock music–which traces its origins to a bunch of misfits thinking up the Devil’s music–going to remain as tough a lock to pick for Christians who just don’t fit in? And furthermore, is the mainstream ready for Christian rock that’s actually good?”

Throughout the book are interesting (and often humorous) reflections on the concerts, churches and conventions he attended, the people he met and the songs he heard. Here he reflects on his experience at Mark Driscoll’s Mars Hilly Church: “Mars Hill is a rock of certainty in an uncertain world, albeit one with a [“really good”] sound system and a worship band so loud my ears were ringing as I walked out into the balmy March night. No pastors were at the door to greet people as they left–I suppose that’s a practical impossibility with so many parishioners–and while groups of friends met up here and there, most people just headed for their cars and went home. It’s almost like a Home Depot model for a church. You go in, get what you need, and leave. If a project is too big, you can ask for help, and someone on staff will show you what you need to tackle it yourself.”

He discusses hand-raising in worship. “This gesture is probably the characteristic of evangelical services that looks the most unusual to outsiders. Some call it a “hug from God,” and as the music that morning lifted in intensity, more and more hands popped up till the ballroom looked like a psychedelic classroom in which a lot of students had questions.”

And reflecting on the worship music he heard at Gospel Music Week, he shares his disgust with this form of music. “I’m not saved and don’t think I ever will be, but if such a miracle were to take place, I can’t imagine anything worse than being forced to pay for my salvation by listening to worship music for the rest of my days. Worship music is the logical conclusion of Christian adult contemporary music–not just unappealing but unbearable to anyone not already in the fold.”

He goes on to say “This isn’t music to appreciate; it’s music to experience. People at a worship service close their eyes and, as ecstasy spreads across their faces, begin to rock rhythmically, arms out, mouthing the lyrics. It’s more than a little sexual and a tad uncomfortable if you’re sitting next to an attractive person who’s been overcome by the Spirit.” … “I told Di Sabatino I thought there was an unsettling, near-sexual character to one of the worship services I’d been to. ‘Nobody talks about it, but that’s pretty much what’s going on,’ he said. ‘They’re having this intense, experiential experience with God. Very intimate, very private, very all-encompassing.'”

And then he notices just how much worship music is written about individuals and how much is written from God’s perspective. “Worship tunes tend to evince an adolescent theology, one that just can’t get over how darn cool it is that Jesus sacrificed himself for the world. “Our God is an awesome God.” “O Lord, you are glorious.” “How can it be/That you, a king, would die for me?” Moreover, it’s self-centered in a way that reflects evangelicalism’s near-obsession with having a personal relationship with Christ. It’s me Jesus died for. I just gotta praise the Lord.” … “It does seem a little overconfident, if not downright presumptuous, to communicate such a holy mystery as God himself taking time out of running the universe to speak to you by setting what you think is His thought process to a riff you ripped off from Green Day.”

And then he points out how some bands are terrified of being pigeon-holed as “Christian bands,” even if the members of the band are all believers. At the same time, the Christian music industry is just desperate to acknowledge these people as their own. “In a remarkable display of competing pathologies, the Christian music industry was trying to lay a definitive claim to a group so terrified of being seen a Christian artists that its members hadn’t shown up. … Switchfoot won Artist of the Year. Toby Mac, who presented the award, prefaced it by saying, ‘We have to acknowledge that they’re out there in the world.’ The absent band got a standing ovation.”

After discussing just how ordinary many Christian musicians are, he writes “I believe this, as much as anything, is holding back Christian rock from greater commercial acceptance. Rock stars aren’t supposed to look like normal people. That’s why we pay them so much money. We want rock stars to be everything we’re not–impossibly skinny, stupid rich, unshowered, smelly and miserable. If we wanted to see happy, pudgy dudes with Van Dyke beards and spiky haircuts onstage, we’d pay more attention to the roadies.”

He describes watching David Crowder deliberately remove himself from the limelight in order to produce unique, and uniquely good, music. As he did so, Beaujon became so engrossed in the music that, for a minute or two, he forgot all about Crowder. “And that, my friends, marked my conversion to, or at least the end of my enmity to, worship music. Here’s a guy surrounded by rabid fans who’d have done anything to get close to their worship leader (you should have heard some of the lines people laid on me to try to get my all-access pass after the show), consciously removing himself from the spotlight. There was only one star at that evening’s show, and he hadn’t been onstage at all.”

And finally, he concludes “It’s truly fascinating, I thought, how music is the public square of evangelical Christianity, a place where all these visions of Christ get a hearing. Most everyone seems to agree that the current Christian culture needs to change, and, slowly, a dialog is emerging.” He holds out hope that Christian music will continue to evolve and to improve. It seems that he will continue to listen to it.

I was disappointed to see that, as do so many music critics, Beaujon tends towards the artists that are, for lack of a better word, weird. He seems to write off the vast majority of Christian singers as mere rip-off artists and highlights many of the ones that are on the fringe: ones who, strangely enough, are possibly not Christian at all. Among those he highlights are ones who swear and drink freely, ones who write songs based on Muslim sacred texts and who celebrate doubt about God and the Bible, and the ones who reject the Christian music industry to go in their own direction. This means that there are times he discusses the industry through the perspective of bands that are so far on the fringe that they are hardly representative of Christian music at all.

The book’s sole major misstep is a chapter dedicated to following an organization that appears at Christian music festivals battling against abortion. The organization seems to have little connection to the Christian music world, leaving me baffled as to why he would dedicate an entire lengthy chapter to following the group to rallies in Washington. Or I would be baffled if he didn’t make it clear that he has no use for these people’s Pro-Life stance. This chapter deviates from the focus of the rest of the book and should not have made it past an editor. On a more minor note, he often focuses undue attention on the music itself rather than the lyrics. While music is no doubt important, and while we should clearly attempt to bring before God music that is excellent, he expends little effort in examining lyrics. Many Christians, as much as they love a good melody, wants songs that speak of the great truths of the Scriptures more than they want songs that are memorable or even musically superior. There are two dimensions to songs and he seems to give preeminence to the wrong one.

Despite these few disappointments, the book offers a great deal of good and interesting commentary. Beaujon’s outside perspective is welcome and he provides a lot of food for thought, even if he does carry with him a good many biases. He points to certain aspects of the Christian subculture that baffle unbelievers. He points out some of the hypocrisy and contradiction that plagues the industry.

While a book that is far from perfect, and a book from which we can only learn so much, Body Piercing Saved My Life is nevertheless quite fascinating and a title I thoroughly enjoyed. For those who are interested in the subject matter and are willing to endure a bit of rough language (most of which, unfortunately, comes from the mouths of Christian musicians) it is a rewarding and engaging read.