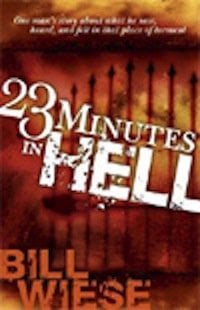 I suppose it was inevitable that, with a bestselling book describing an author’s “90 Minutes in Heaven,” one would soon follow detailing a journey to hell. Sure enough, Bill Wiese follows Don Piper’s 90 Minutes in Heaven with his own 23 Minutes in Hell. And interestingly, if you visit Amazon.com you’ll see that you can get a deal if you buy both of these books together. Clearly they are being read and appreciated by the same audience.

Wiese’s story is simple. One night, while sleeping, he was transported to hell. There God showed him hell in all its horror and terror. He was thrown into a barred cell, he was abused by demons, he was shown lakes of fire, and he saw people suffering torment. After a brief visit with Jesus, he was transported back to earth in order to tell people that Jesus is returning soon and to assure them that hell is a real place (and one that exists in the center of the earth, apparently). Wiese’s hell seems to be equally influenced by the works of Ray Comfort, Mary Baxter and Gary Larson. That is to say it is at times biblically accurate, at times patently unbiblical, and at times near-comical.

There are many things that can be said about this book from the perspectives of literature and theology. I will focus on just one under each heading. In terms of literature, there is little that can be said. This book is just plain bad. It is poorly written and seems cobbled together. It is something of a chore to read, though it is blessedly short and, unlike hell, the punishment does not last for long. I have read worse, of course, but there is no doubt that this is not a well-written book.

My foremost concern involves theology. And here I want to point to the error that also plagued Don Piper’s 90 Minutes in Heaven. It regards the necessity of such visitations. Don Piper travels the world now under the banner of “The Minister of Hope.” He brings hope by telling people that he has been to heaven and can attest that it is a real place. Bill Wiese now shares his message that hell is also real and is a real place (a really bad place). Yet in the Bible I find no reason to believe that God would want or need people to carry this kind of message based on their own experiences. God has given us the Bible precisely so we do not need such people! When a man travels around carrying a message like this one, he implicitly denies that the Bible is warning enough; his ministry indicates that he feels we need something more than “merely” the Bible in order to warn people of the joy to come to those who believe and the wrath to come for those who do not. These messengers, perhaps inadvertently, deny the uniqueness and the sufficiency of the Bible. If people will not believe the words of God as given in Scripture, why should or would they believe the fanciful words of a mere man?

All this is not to say that 23 Minutes in Hell does not have any redeeming qualities. The author shares many things about hell that are true. He often quotes excellent teachers (and ones who would be less than thrilled, I’m sure, to see their names printed inside this book!). He does not downplay the horrific nature of hell or, as do so many today, attempt to deny its reality. However, one thing that is conspicuous by its absence is any mention of hell being the presence of God in His wrath. Wiese describes it as a place where people are punished for not believing in Jesus; yet the punishments are inflicted by demons and fire rather than by God Himself. From the Bible it seems clear that God is the one who is active in hell and that He punishes both humans and demons. If Wiese does downplay the awfulness of hell, it would be right here.

Like 90 Minutes in Heaven, this book is plagued with theological errors and, also like Piper’s effort, it does not deserve a place in anyone’s library. Take a pass on it!