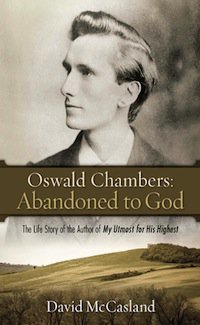 Buy from Amazon
I have to admit: Only a few years ago I was quite convinced that Oswald Chambers simply could not be worth reading. I had first heard of the man through the context of a sudden rush of interest that seemed to be spearheaded by the Christian music industry. Several Christian artists banded together to record an album and the devotional classic My Utmost For His Highest was packaged with it. I assumed, somewhat unfairly, that if he garnered this amount of interest from Christian musicians there must be something wrong with him. I am ashamed to admit this today.

In the last few years I have come to develop an appreciation for the life and ministry of Oswald Chambers. I still know only very little about the man but have come to see an almost prophetic aspect to his writing. Much of what he wrote almost 100 years ago seems as relevant today as it was then. There were some strange and even unbiblical aspects to his ministry, but what shines most clearly about Chambers’ life is his all-out devotion to Christ. He knew the Savior deeply and profoundly and sought to submit his life entirely to the Lord.

Oswald Chambers (1874-1917) was born in Scotland, where he also spent most of his youth. He was a gifted artist and intended to follow that path in life until, at age 22, he felt called into the ministry. He studied (and later taught) at a small seminary in Dunoon and, upon graduation, teached and preached in Britain, America and Japan. In 1910 he married Gertrude Hobb, whom he affectionately called “Biddy,” and soon after opened a Bible College. When war engulfed the world, Chambers left the comforts of home and left for Egypt to be chaplain to British troops stationed there. His life and ministry were cut short when, in 1917, he died from complications following surgery to remove his appendix. Biddy continued his ministry in Egypt and, after the war ended, returned to England and began to publish his words which she had often transcribed from sermons, lectures and talks. This amounted to near 30 books, the most famous of which is My Utmost For His Hightest. Oswald Chambers, while appreciated in his day, has become widely known to evangelicals through the labors of his wife.

Abandoned to God is a biography of Chambers written by David McCasland who also authored, Pure Gold, a biography of Eric Liddell I recently reviewed. He is an excellent biographer who is able to major on the majors, focusing on the most important aspects of his subject’s life. As often as possible he allows the man to speak for himself and he quotes continually from the writing and correspondance left by Chambers. He seems to present, as nearly as we could hope, Oswald as he truly was.

It has been several years since I first heard the name of Oswald Chambers. I am now glad to know that his writing has experienced a resurgence, especially in the form of My Utmost For His Highest which is still available in any Christian bookstore. A new generation deserves to be able to know the name of Chambers and to benefit from the example he left us of a man who gave all he had to His Savior. Abandoned to God is a well-written, thoroughly-researched and stirring biography and one I am glad to recommend to you.