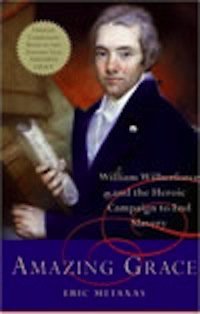 Buy from Amazon
That the name of William Wilberforce has largely been lost to history seems somehow unfair. Wilberforce was the driving force behind the abolition of slavery within the British Empire. A Member of Parliament for forty-five years, the results of his efforts are still seen and understood in Western society to this day. Though his impact was felt not only at his time, but has extended through history, few people know his name. In Amazing Grace, Eric Metaxas’ new biography of Wilberforce, which was timed to coincide with the release of a film by the same title (which was, in turn, timed to coincide with the two hundredth anniversary of the abolition of the slave trade) he makes the valid comparison to a scientist who discovers the cure for an inoculation against a terrible disease. As the disease is eradicated and passes out of memory, so the scientist’s name is likely to be forgotten. And this is what seems to have happened to Wilberforce. We live in a day where slavery is unthinkable and we can hardly conceive of a time when the best and brightest of society defended it and thought little of pillaging the African continent for their own gain.

Though those of us who remember Wilberforce know him primarily as the leader of the fight to abolish the slave trade, the truth is that he fought to great battles, the first against slavery and the second for the reformation of manners (which is to say a kind of social reform against rampant immorality and vice). While this biography focuses primarily on the first of these battles, the second does receive some attention as well. Life in Wilberforce’s day was brutal, decadent, violent and vulgar. Societal evils were many and horrific: “epidemic alcoholism, child prostitution, child labor, frequent public executions for petty crimes, public dissections and burnings of executed criminals, and unspeakable public cruelty to animals.” All of these were far more visible than slavery. Wilberforce knew that, if society was to be brought into line with the commandments of God, it would need to begin with the reformation of manners and he spent much of his life attempting to ban what was vulgar and unbiblical and to promote what was beautiful and Scriptural, knowing that success in the small things would eventually lead to success in greater things. Wilberforce has rightly been credited with giving the West its social conscience.

Having read this biography, there are at least three great lessons I have drawn from the life of this great Christian. First, I have seen the value of persistence. Wilberforce fought for years and years before seeing any measurable success in his battle to outlaw the slave trade. Had he not persisted, it may have taken many more years and hundreds of thousands of lives for the trade to be abolished. Second, I have seen that there is hope even more the most evil of the many evils in our society. There was a time when very few could have imagined that slavery would ever be banned and yet, in one lifetime, attitudes were changed so that today slavery is almost unimaginable. As we think about the evils that plague contemporary society we can have hope that minds, hearts and attitudes can change. Third, I have seen the value of incremental change for Wilberforce was willing to accept incremental improvements. At one point he supported a bill, passed on a trial basis, that would regulate the number of slaves that were permitted to be transported on a single ship. Previously slaves had been laid in rows on benches, chained on their sides with the front of one pressed against the back of the next. Following the legislation, improvements were made. Though the bill implicitly and explicitly supported the continuance of slavery, Wilberforce saw it as a step in the right direction and was willing to support it. Another time he voted for a bill that required plantation owners to register all of their slaves. While this bill also supported slavery, Wilberforce saw that a registry of slaves would keep plantation owners from adding to their number of slaves by buying them from illegal slave smugglers. Incremental changes may lead to greater and more profound changes.

Some who have read the book have made note of the author’s occasional use of sophomoric humor. Though there are several examples, perhaps the most blatant falls outside of the flow of the book’s text in the Acknowledgments. “I wish first and foremost to thank my typist, yours truly, for quite literally transcribing my thoughts as I thought them, a feat hardly to be explained, and yet quite literally true.” I suppose some find this kind of humor to be funny but in a serious biography it seems a little out of place. Other examples are less obvious and are perhaps more clever than obnoxious: “Wilberforce may have been crazy like a fox, but Fox himself was so often drunk as the proverbial skunk that Wilberforce wisely decided to forego badgering him about becoming involved. Even if Fox had initially assented to lend his name to the cause, it seems rather likely that he may have eventually weaseled out of any real commitment anyway, and it is always possible that, given his affection for dissolute living, he may even have become a mole for the opposition.” If you missed the humor in that paragraph, read it again and you should catch it.

Though the author’s expression can seem a trifle obnoxious at times, this is true more in the early pages than in the majority of the text. The reader who presses on will be richly rewarded, not only with great content but even with some excellent prose, a brief example of which I will provide here. “And thus, history: three men, each named William, each twenty-seven years old, talking at the base of an ancient oak tree on a hill in May: one prime minister, one prime-minister-to-be, and one who would stand from that moment forward at the center of something so big and beyond any single man that a tree whose life had begun several centuries earlier, and would continue for nearly two more, was the humble creature chosen to bear mute witness to the conversation.”

Despite its few problems, and though this may not be among the greatest biographies ever written, it is certainly a good one and is a worthy addition to any library, personal, church or public. It wonderfully describes and analyzes the life of a great Christian man who can and should serve as an inspiration even today. I enjoyed it thoroughly and commend it to you.