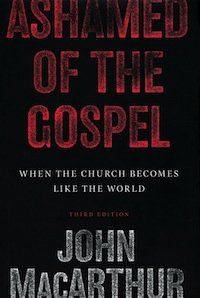 Buy from Amazon
It was just over one hundred years ago that the great preacher Charles Spurgeon began the long battle that would ultimately cost him his life. He saw in the church of that era a trend away from the preaching of the gospel and towards entertainment. The church began to focus on pleasing people rather than preaching the gospel in all its offense and power. The battle Spurgeon waged became known as The Downgrade Controversy.

Now, a full century later, John MacArthur is sounding the alarm to warn discerning believers that the crisis the church faced in the late 19th century has come to the modern-day church. The church is, once again, on the downgrade. While Spurgeon fought against the influence of liberalism in the church, today we need to fight against the influx of pragmatism. Believing that those who ignore history are dooming themselves to repeat it, he has written Ashamed of the Gospel to show that the alarms Spurgeon sounded are equally relevant in the 21st century church. To prove this point he precedes each chapter with a relevant quote from Spurgeon.

MacArthur believes that the root cause of the downgrade of our day is a deep-rooted shame for the gospel. The church has grown ashamed of the purity and simplicity of the gospel. In place of traditional “old-time religion” the church has begun to substitute a “show-time religion” that focuses on entertainment more than the preaching of the Word. Pleasing the goats has taken precedent over feeding the sheep – glitter over the gospel. Doctrinal purity has been replaced by pragmatism, what God commands by what works.

The themes of the book are easy to discern from an overview of the chapter titles. Some of the chapter titles are: Christianity on the Down-Grade, The User-Friendly Church, Gimme That Showtime Religion, All Things To All Men, The Foolishness of God, and I Will Build My Church.

Equally fascinating as the book are the appendices. The first is a history of the Downgrade Controversy, the second an examination of Charles Finney’s contribution to pragmatism in the church, the third an essay by the puritan preacher Thomas Boston entitled Carnal vs Spiritual wisdom and the fourth an update on Evangelicals and Catholics Together. The final appendix is especially interesting as it allows MacArthur a forum to explain how ECT came together and why he stood strong against it.

A courageous book that has likely earned MacArthur far more enemies than friends, I highly recommend this book to all believers, both clergy and laity, but especially those who are discontent with much of the modern church-growth movement. If you have read books like The Purpose Driven Church you owe it to yourself to balance that book with this one. You will not regret it.