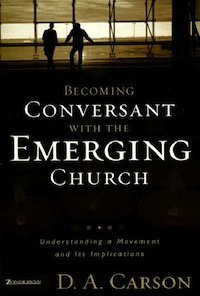 While much has been written about the Emerging Church (henceforth known as EC), D.A. Carson is, as far as I know, the first person to write a book-length treatment evaluating and leveling critiques at the movement. At any rate he is certainly the most widely-respected. And yes, I know the EC leaders prefer to call it a “conversation,” but since Carson does not shy from calling it a movement, nor will I. In Becoming Conversant with the Emerging Church, subtitled “Understanding a Movement and its Implications,” Carson seeks to introduce the movement, assess it, and address several of the most glaring weaknesses. There are few men who are better suited to this task. Carson is a scholar and is known for his conservative, biblical theology as much as for his sound research and presentation skills. All of those admirable attributes are displayed throughout this book.

In the preface Carson writes, “Whenever a Christian movement comes along that presents itself as reformist, it should not be summarily dismissed. Even if one ultimately decides that the movement embraces a number of worrying weaknesses, it may also have some important things to say that the rest of the Christian world needs to hear. So I have tried to listen respectfully and carefully; I hope and pray that the leaders of this “movement” will similarly listen to what I have to say” (page 10). That spirit of love and charity pervades the book.

The book follows a logical format – introduction, admiration, criticism. The first chapter, “The Emerging Church Profile,” is an uncritical summary of the Emerging Church. Carson arrives at three conclusions. First, the EC must be evaluated as to its reading of contemporary culture. Second, the EC needs to be evaluated as to its beliefs regarding Scripture. Third, the EC’s proposals for moving forward in this postmodern culture need to be examined.

The second chapter examines the strengths of the Emerging Church. Carson praises four aspects of the EC. First, they are adept at reading the times and are able to think through the implications for our witness, our grasp of theology and our self-understanding. Second, they value authenticity. Third, they recognize the social location of the church, and know that the church is within a cultural context and cannot be removed from it. Fourth, they place high value on evangelism. Fifth, that they probe tradition and seek to build a faith that is rooted in the past while still being relevant to the present.

Having shown the strengths of the EC, Carson turns to several weaknesses in the third chapter. He critiques their evaluation and denigration of modernism, their condemnation of confessional Christianity and accuses them of having a view of Christianity under modernism that is both theologically shallow and intellectually incoherent.

The fourth chapter serves as an introduction to postmodernism and the postmodern mindset. For those who are unfamiliar with the changing times, and our society’s emerging epistemology, this chapter is a valuable introduction.

Carson goes on, in chapters five, six and seven to critique the Emerging Church’s response to postmodernism. He is especially critical of the EC’s handling of truth, and frustrated by their refusal to deal with the tough questions. He finds that more often than not, the EC leaders refuse to deal with the tough questions related to claims of absolute truth. He is also concerned with the EC’s stubborn refusal to use Scripture as the norming norm against appeals to tradition, as well as the EC’s emphasis on “belonging before believing.” He deals with two books in some depth – Brian McLaren’s A Generous Orthodoxy as well as Steve Chalke’s The Lost Message of Jesus, thus representing leaders of the Emerging Church on both sides of the Atlantic. Carson arrives at a chilling conclusion. “I have to say, as kindly but as forcefully as I can, that to my mind, if words mean anything, both McLaren and Chalke have largely abandoned the Gospel…I cannot see how their own words constitute anything less than a drift toward abandoning the gospel itself” (page 186-187).

The book concludes with a list of relevant Bible passages and “A Biblical Meditation on Truth and Experience.” He closes with a challenge. “So which shall we choose? Experience or truth? Damn all false antitheses to hell, for they generate false gods, they perpetuate idols, they twist and distort our souls, they launch the church into violent pendulum swings whose oscillations succeed only in dividing brothers and sisters in Christ…If emerging church leaders wish to become a long-term prophetic voice that produces enduring fruit and that does not drift off toward progressive sectarianism and even, in the worst instances, outright heresy, they must listen at least as carefully to criticisms of their movement as they transparently want others to listen to them…If they manage this self-correction and worry less about who is or who is not emergent and rather more about learning simultaneously to be faithful to the Bible and effective in evangelizing the rising number of alienated biblical illiterates in our culture, they may end up preserving the gains of their movement while helping brothers and sisters who are more culturally conservative than they are learn to reconnect with the culture.” (page 234).

Carson faced a great difficulty in this book. How does one fairly and adequately critique a movement as eclectic as the Emerging Church? Many have criticized this movement for being so hard to pin down. Carson admits that not every critique he makes will be valid for every person who considers himself a part of this “conversation.” Yet I feel that Carson did as well as could be expected, focusing the majority of his attention on those who have the majority of the influence.

My concerns with the book are twofold. First, while the Emerging Church is emerging at the popular level, this book is written to appeal more to scholars and to those who are well-versed in theology than to the neophyte. If it is true, as Carson claims, that most Emerging leaders come from a fundamentalist background, then perhaps this is appropriate. But I am not sure that this book offers a lot by way of popular appeal. If your teenage son has become enamored with an Emerging Church while at college, I do not know that this book will interest him or convince him to re-examine his church. That being said, he was not Carson’s target audience for Becoming Conversant with the Emerging Church. I have little doubt that the majority of the major players leading the Emergent conversation will read and absorb this book. I pray that the Spirit works in their hearts to humble themselves before the Word, that they can test what Carson says in the light of Scripture.

My second concern is that Carson does not address in any depth some of the major concerns of believers who examine this movement from the outside. Among these are the mysticism and ecumenism that seem foundational to the Emerging Church.

This book is surely the most valuable contribution available to us in challenging the Emerging Church. Carson evaluates the EC in the light of Scripture, showing where it falls far short and providing suggestions for appropriate remedies. This book succeeds in its task and I highly recommend it.