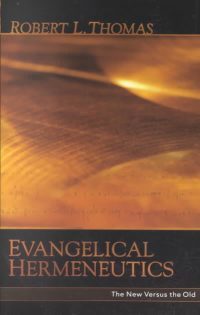 There are some books I can read in an evening or two and feel like I have a good grasp of what the book is all about. There are others that I can pour over hour after hour and still feel like I am only scratching the surface of the book. Evangelical Hermeneutics falls into the latter category. Though not an easy read, this book is rewarding.

Hermeneutics is one of the steps used in interpreting and studying the Bible. Specifically, the author defines it as “a set of principles for interpreting the Bible.” Once a passage has been properly interpreted, meaning and application can be drawn from it. It stands to reason that if the principles of interpretation are wrong, the meaning and application are likely to be wrong as well. What the author seeks to show is how these principles have changed over the past decades and the effect that is having on Christianity today.

The author’s goal for this book is fourfold:

Robert Thomas believes strongly in the value of the traditional form of hermeneutics, known as the grammatical-historical method. Throughout the books he cites examples of modern theologians who have either wrongly applied grammatical-historical principles or have invented new methods of hermeneutics. More importantly, he shows the effects these people have had on the Christian world. He focuses specifically on several issues: feminism, open theism, missiology, theonomy and a few others. One of the more fascinating chapters deals with dynamic equivalence (which is a method of Bible translation) and how it is not as much a method of translation as a set of hermeneutical principles. Some of the other topics that caught my attention were preunderstanding and the New Testament use of the Old Testament.

There are several applications to my life and my faith that I have taken from this book. First, it has solidified my understanding of the principle of single meaning, which states that each passage in the Bible has one and only one meaning. Second, it has helped me see the value of the grammatical-historical method. Though this is the system I have adhered to in the past, I am now more confident that it is the most Scriptural method. Third, I see the importance of removing all possible preunderstanding before I examine a text. What I mean by this, is if I am going to examine what the Bible says about the role of women in ministry, I need to look at the passages to determine what they mean, not what they say about women’s roles. It is a subtle but important difference. Finally, I have come to understand more clearly the Holy Spirit’s role in helping me understand the Bible.

I can’t deny that at times I felt lost in this book, primarily because the book presupposes a greater grasp of hermeneutics than I currently have. The other reason is that it spends a lot of time discussing the end-times and that is not a topic I have studied in great depth. The author also tends to use words without fully defining them. An example is the word “meaning” which he defines as “the author’s truth intention.” “Truth intention” is not a phrase I am familiar with, though perhaps if I was more familiar with hermeneutics I would be.

I would recommend this book to anyone seeking to understand how Scripture is supposed to be used. Realize, though, that it does help to have a solid understanding of hermeneutics before reading it. I suspect I will be returning to this book often as I study the Word.