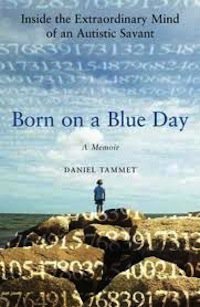 Buy from Amazon
Born on a Blue Day is the memoir of Daniel Tammet, a British autistic savant. The subject of a documentary entitled The Boy With The Incredible Brain (also broadcast under the title Brainman) Tammet has gained some notoriety and worldwide attention for his incredible feats of memory and mathematics.

Tammet has a form of autism known as Asperger’s Syndrome, a condition that effects social and communication skills. It is characterized by narrow interests and unconventional preoccupations; by repetitive behaviors; by logical and technical patterns of thought; by behavior and interpersonal interaction that can be socially and emotionally inappropriate; and by clumsy and uncoordinated motor control. Tammet also has Savant Syndrome, the condition most commonly associated with Dustin Hoffman’s character from the film Rain Man in which he portrayed Kim Peek, an actual person who suffers from the syndrome. Savants are typically developmentally or mentally handicapped in some areas but display extraordinary abilities in others. They are often amazingly gifted in memory, mathematics, art or music. Added to these, Tammet experiences synesthesia, a rare neurological condition which results in the ability to see letters and numbers in colors, shapes, motions or textures. He is truly an extraordinary individual.

My interest in this book was primarily owing to the fact that both a member of my family and three children who live next door to us have Asperger’s Syndrome. While there is much that can be learned about the condition through typical books or websites, Tammet has the unusual ability to describe the condition and to provide an insider’s perspective on it. Like many people with the syndrome, his ability to communicate through the written word far exceeds his ability to express himself verbally.

A frustrating problem I found with this book is that while Tammet’s conditions and abilities are fascinating, his life is in many ways very ordinary and, since he is only twenty seven years old, has probably only just begun. Like many people with Asperger’s, he has a fascination with details and the story sometimes becomes bogged down in these. It seems at times that no detail is too small to include, a fact that is interesting in light of his condition, but can occasionally make for tedious reading. Where the book begins with lots of interesting information about how Tammet’s abilities made him different, the book soon focuses more on his disabilities. It is not until the final few chapters that he focuses again on his amazing and unique abilities.

The book’s first seven chapters take the reader from Tallet’s birth into what soon became a very large family to his first experience of independence–a trip to Lithuania where he served in a volunteer capacity as an English teacher. This trip was pivotal, for it helped him discover that he was capable of some level of independence (certainly not a given for people with Asperger’s) and that this was something he desired. It also allowed him to come to terms with his homosexuality and it was here that he made his sexual orientation public. That he is homosexual did not come as a surprise to me based on my knowledge of people with Asperger’s, for their social handicaps make them look and feel different. It is little wonder that they often gravitate away from traditional relationships. They are also very easily victimized and can be led to homosexual behavior through predators.

Following the description of his travels in Lithuania, the pace of the book slows. Tallet meets Neil, a man who quickly became and continues to remain his partner. Together they began an internet-based company specializing in teaching languages. Tallet also undertook some amazing feats, such as setting the European record for memorizing the value of pi, taking just three months to memorize its first 22,517 digits. As part of the Brainman documentary he was challenged to learn the language of Icelandic in just one week and succeeded enough that he was able to converse quite freely in Icelandic on national television. He also discovered religion, embracing Christianity (he does not mention his denominational affiliation, but judging by his particular love of Ave Maria I think we can guess) and marking his conversion as Christmas of 2002. He enjoys the writings of Chesterton, a man who may well have been on the higher end of the autistic spectrum. Sadly, Tallet’s brief testimony includes no mention of sin and certainly no mention of modified behavior. I found it particularly interesting that he regards his love of Christianity to be almost entirely intellectual. His autism makes it difficult to understand emotions and feelings and thus his conversion was largely intellectual and logical. This is something important to keep in mind for those of us who interact regularly with people diagnosed with this condition and who wish to see them embrace the Savior.

While somewhat uneven at times, Born on a Blue Day was an interesting read and quite a quick one. It is certainly amazing to see the remarkable abilities God gives to some people and to realize that, despite advances in technology and medicine, the power of the human brain is still far beyond our comprehension. This book will certainly not appeal to everyone (though, based on the fact that it has appeared on the New York Times list of bestsellers, it does seem to have wide appeal), but I am glad to have read it and would not hesitate to recommend it to others, though only in view of the caveats mentioned earlier.