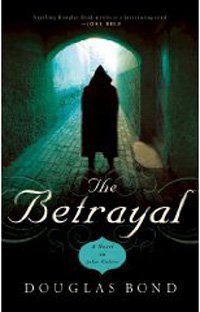 Buy from Amazon
I wonder what Calvin would have said, what he would have thought, if he could have peered five centuries into the future and seen how he would be honored on the five hundredth anniversary of his birth. Several new biographies; a long list of conferences; books discussing every aspect, every facet of his theology; a bobblehead; and now The Betrayal, a novel that recounts his life as historical fiction.

The Betrayal, published by P&R Publishing, comes from the pen of Douglas Bond who has written several historical fiction novels in the past. In this new book, he writes from the perspective of a lifelong sworn enemy of Calvin–a boy who grows up in the same town and who, as a man, remains involved with Calvin’s life to the very end. As the publisher says, “This fast-paced biographical novel is a tale of envy that escalates to violent intrigue and shameless betrayal.” I hesitate to say too much about the plot lest I inadvertently ruin it for those who would like to read the book. Perhaps there is value, then, in simply sharing a few of the endorsements for it.

Burk Parsons, editor of John Calvin: A Heart for Devotion, Doctrine, Doxology says, “With masterful insight, Douglas Bond offers us an illuminating portrait of the life, ministry, and theology of John Calvin. For readers of all ages, this well-researched, historical fiction takes us back to the sixteenth-century Reformation as if we were eye-witnesses of all that God accomplished in and through the life of His humble servant John Calvin. If you enjoy reading the fictional works of C. S. Lewis, you will love this book.”

Joel Beeke, who has written several books on Calvin and Calvinism writes, “Douglas Bond introduces John Calvin to us in a gripping way, colorfully taking us back to Geneva and its times, unveiling Calvin as the principled man of action, commitment, and love that he was. The Betrayal makes for an exciting read, showing the great Reformer’s heart for theology, piety, and doxology, while almost effortlessly and implicitly undoing caricatures about Calvin along the way. If you want Calvin and his times brought to life in a page-turner, this is the book for you!”

And David Hall, who heads up Calvin500, writes “Douglas Bond’s latest novel introduces many to a prejudicially ignored character: John Calvin. This historical fiction brings Calvin back from an unwarranted oblivion. Thanks to Bond’s vivid writing style and thorough acquaintance with the period, readers now have a looking glass into the life and history of a great man. I am pleased to commend this fine book to readers, especially those who will meet Calvin in these pages just in time for the 500th anniversary of his birth.”

As for me, well, I’ll be honest and say that I read fiction only on rare occasions and my preference would always be to read a standard biography over a historical novel. However, I do know that a lot of readers prefer fiction and for these people, I think The Betrayal will be a great way of getting a useful overview of Calvin’s life. I was sometimes amazed at just how much of Calvin’s life is present in this book but never in such a way that the novel becomes bogged down in irrelevant details. Bond has done a great job of integrating reality with fiction so the reader will hardly know when one begins and the other ends.

If you are a fan of novels or of historical fiction, and if you are anxious to learn a little bit about John Calvin, this man who is so fondly remembered even five hundred years after his birth, you cannot go far wrong in reading The Betrayal.