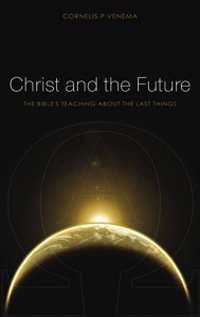 Buy from Amazon Buy from WTS Bookstore
Cornelius Venema’s The Promise of the Future, published in 2000 by Banner of Truth, has been hailed as the most important major Reformed study in biblical eschatology since Anthony Hoekema’s The Bible and the Future (published in 1972). It is not coincidental, I am sure, that Venema is a former student of Hoekema. The Promise of the Future was expanded from a series of articles serialized in The Outlook magazine. Now Christ and the Future is an abridgement of the original edition. The publisher says, “While [The Promise of the Future] has justly received acclaim from numerous reviewers, its size and weight may discourage the less experienced reader from taking it up and benefiting from its contents. The publishers, therefore, are grateful to Dr. Venema for kindly agreeing to produce this abridgement of his original edition, and are now delighted to offer it to a wider readership in this smaller, paperback format.” And, indeed, this volume, coming in at just over 200 pages, is far more accessible and far more likely to gain a wide readership. It is an ideal introduction to the subject of the Bible’s teaching about the last things.

Where the original volume contained sixteen chapters divided into six parts, this book has just twelve chapters. It may be easiest to trace the author’s argument by simply listing the chapter titles:

Time would fail me, of course, to describe the nuances of the author’s argument–the particulars of his views in each of these areas. After all, the various eschatological views, which seem to be just about as numerous as the number of Christians, often depend on small distinctions of interpretation. As with his earlier volume, Venema leans towards an “optimistic amillennialism.” His evaluation of the four millennial views is fair, I believe, and he goes to great lengths to describe their beliefs accurately. When he considers the resurrection, the final judgment, eternal punishment and other such issues, he comes down squarely on the side of biblical orthodoxy, speaking out harshly against annihilationism and universalism, and affirming the reality of judgment. He looks constantly to Scripture to defend all that he teaches.

This is a very readable, enjoyable and biblical examination of what the Bible teaches about the last things. Dr. Venema has crafted a careful, nuanced book that covers the topic well but also briefly enough that it avoids becoming bogged down in detail. While he defends the amillennial view, he offers information that will help anyone, regardless of his eschatology, to better understand what is to come. It will help every reader better understand what the Scriptures teach about the end of this age and the age to come. I recommend it for any reader.

Those who are seeking more detail about the nuances of his argument may wish to read these reviews by Richard B. Gaffin, Jr. and Keith Mathison . Even better, buy it and read it for yourself. This book will make a great addition to your library.