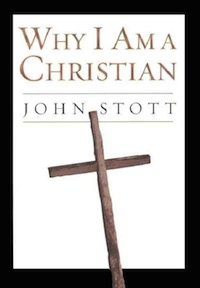 In this day and age we are presented with book after book telling Christians to embrace the mystery of God, and to emphasize narrative while downplaying exposition. Apparently John Stott never received the memo. Why I Am A Christian is not Blue Like Jazz or a story the Emergent crowd would support. Instead it is a logical, biblical examination of the claims of Christ and the reasons John Stott is a Christian.

The book was inspired by a public address delivered by Bertrand Russell’s in 1927 entitled “Why I Am Not A Christian.” While the book does not directly interact with Russell’s arguments, it does provide the opposite perspective. Through seven chapters Stott provides seven reasons that he is a Christian and an invitation for the reader to join him in the kingdom. Here are the six reasons Stott is a Christian:

The book concludes with “the greatest of all invitations” – an invitation for the reader to receive Jesus as Lord and Savior.

The book is well-written and generally theologically-sound. It is, on the whole, consistent with a Reformed understanding of the faith. The only real concern I had was with several references to Malcolm Muggeridge whom Stott refers to as an example of another man (along with himself, the apostle Paul, Augustine and C.S. Lewis) who was pursued by the Hound of Heaven. This choice seems inconsistent with much of the theology taught within the book, as Muggeridge was, of course, a devout Roman Catholic. I suppose this is consistent with Stott’s recent ecumenical leanings. It is too bad as it calls into question what Stott really believes.

Why I Am A Christian is a good book and one I can recommend with only a small amount of hesitation. It is well-suited to provide to a friend or family-member who is interested in learning more about the Christian faith. It is a good “giveaway” book. I can’t say that it would be my first choice, but you could certainly do far worse.