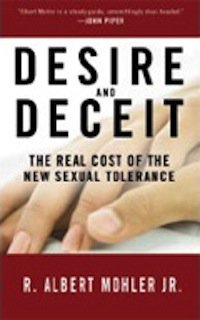 Buy from Amazon Buy from WTS Bookstore
Dr. Albert Mohler has released four books this year and they have had very different origins. Atheism Remix began as the W.H. Griffith Thomas Lectures Mohler delivered at Dallas Theological Seminary early in 2008; He Is Not Silent is an original work, written as a book; Culture Shift and his most recent work, Desire and Deceit, began as articles written over a period of years, most of which were posted at Mohler’s blog. Each of these books speaks to a different subject that is of great importance in our cultural context.

Desire and Deceit is subtitled “The Real Cost of the New Sexual Tolerance.” In this book Dr. Mohler addresses issues related to sexuality and, in particular, issues related to contemporary challenges on biblical sexuality. It begins in a unique spot, quoting J.R.R. Tolkien and the biblical wisdom he shared with his sons, warning them to avoid the devil’s snares in deviant sexuality. From here Mohler looks at lust in both a secular perspective (quoting philosopher Simon Blackburn) and a Christian perspective (reviewing Joshua Harris’ book Not Even a Hint, a.k.a. Sex Is Not the Problem, Lust Is). Two chapters look at issues related to pornography while ten turn to homosexuality. Mohler wants his reader to understand that the acceptance of homosexuality on the part of Christians can only be done at the expense of critical doctrines and ultimately only at the expense of Christianity itself; the two cannot co-exist. He offers character studies of Alfred Kinsey and Andrew Sullivan, shows how male friendship has been negatively impacted by the widespread acceptance of homosexuality, looks to boys raised by lesbian mothers, and explains the historical developments that allowed homosexuality to become accepted and celebrated in our culture. A final three chapters look to the age of polymorphous perversity, turning to Freud and his followers who championed the idea that every child is a clean slate when it comes to sexual identity; it is only restraint and repression that keeps people from becoming who they are really meant to be. Overall, the book presents a solid, useful primer on issues related to sexuality and the many ways our culture is turning from biblical categories of sexuality.

Those who, as I am, are regular readers of Dr. Mohler’s blog, may find that they recognize some of the chapters. In fact, several of these chapters are almost unchanged from their original form. Though there is some thematic cohesion in the book as it moves from topic-to-topic and chapter-to-chapter, the book’s genesis as scattered blog posts does show even as the book gets printed and put between two hard covers. Unavoidably, the book reads more as a series of articles than as a work that moves consistently and logically towards a certain conclusion.

I suppose my sole wish for the book is that Dr. Mohler would have dedicated just a little more time to proposing solutions and to suggesting how Christians are to live in the midst of new realities. Certainly there is some of this, but not as much as I might have liked. It may be that this is unavoidable in moving articles from a blog format to a book. Still, a little more application would have been nice.

Desire and Deceit completes the list of four books coming from Dr. Mohler’s pen in 2008. Like its predecessors, this book is both valuable and timely and is worth adding to any library. It deals with real issues and offers valuable guidance on them. If I were to rate the books by the order I think you should read them, I would rate this one second behind He Is Not Silent (and ahead of Culture Shift, with Atheism Remix falling behind that).