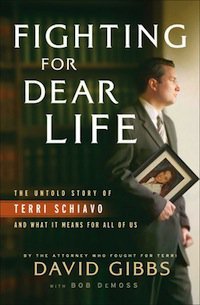 Buy from Amazon
Already more than a year has passed since Terri Schiavo died. Though her story is well known and was the subject of near-constant media coverage, I will repeat the most important points. In 1990, Schiavo, then 26, collapsed in her home and experienced both respiratory and cardiac arrest. She was in a coma for 10 weeks and was subsequently diagnosed as being in a persistent vegetative state (PVS). Her husband Michael was determined to preserve her life and to seek therapy to increase her quality of life. But after successfully suing a doctor who had failed to properly diagnose bulimia before her collapse, he had a sudden change of heart. While he was awarded over a million dollars, most of which was for Terri’s medical care and therapy, he did very little for her. In 1998, once it became legal to do so, he petitioned a court to have Terri’s feeding tube removed. Terri’s family (the Schindlers) fought desperately to keep her alive. The battle raged until 2005 when the tube was removed and Terri was allowed to dehydrate over a period of thirteen days until she finally died. Rush Limbaugh declared the day of her death the day America hit rock bottom. Many people, both within the United States and outside, would agree.

David Gibbs was the attorney who represented the Schindler family throughout much of their battle for Terri’s life. He did this on a pro bono basis. I suppose it was inevitable that he would write a book. I found it interesting that his memoir, Fighting For Dear Life, is published by Bethany House, a Christian publisher. In this book, which is due for publication in August, Gibbs provides an interesting inside perspective on the fight for Terri’s life.

While his denominational background is not clear, it seems that Gibbs is a Christian and he certainly writes from that perspective. He often mentions praying with the Schindler family, committed Roman Catholics, and praying for various aspects of the case. He seems to have fought both on his knees and in the courtroom. While there are only a few mentions of Scripture, it is clear that Gibb’s desire to save Terri was born primarily from a biblical perspective of the value of life.

While I, as with so many people, followed the Schiavo case fairly closely over the final few weeks of Terri’s life, I do not know enough about it to know whether there is information provided in this book that is new. I have not read any of the other books dealing with this tragedy. Certainly, though, the perspective offered by Gibbs is unique and in that way, very interesting. Gibbs describes what it was like to be in the midst of the battle. He describes interaction with judges and lawmakers, friends and family. He describes the often frantic efforts to save the life of a woman who was loved so desperately by her family.

It is difficult, when reading this account, not to regard Michael Shiavo as a villain. And it seems that he was just that. It is exceedingly clear that he acted very often out of motives that were selfish. While it seems that he was initially willing to fight with and for Terri and to stay with her for the rest of his life, his resolve soon failed. Only months after her collapse he began to see other women and had a long-term affair that produced two children before Terri’s death. During the final days of Terri’s life, he was especially selfish, denying her family access to her and, after her death, to her body. They were not even told of her funeral until it was over. In a move of almost despicable irony, Michael had her grave marked with the words “beloved wife.”

Fighting For Dear Life is an interesting book. It’s a shocking book. It is nearly enough to make a reader scream in frustration as he sees attempt after attempt to save Terri’s life end in failure. This woman, though certainly handicapped, was just as certainly alive and active. Her death was a grave injustice that does mark a low point in American history. Perhaps reading this book or another like it will stir people to grapple with the issues that led to her untimely and unfair death. We can only hope that her death will not have been in vain.