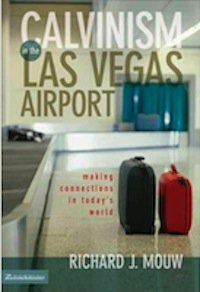 Richard Mouw’s inspiration for the name Calvinism in the Las Vegas Airport came from the film Hardcore, directed by Paul Schrader, an ex-Calvinist. In this film, Schrader presents Jake Van Dorn, a pious Calvinist played by George C. Scott. In one scene, Jake sits in an airport in Las Vegas while trying to track down his daughter, who has gotten involved in the pornography business and is reported to be in Vegas. He has enlisted the help of Niki, a young woman who knows his daughter. As they sit, Niki challenges Jake on what she feels is an exceedingly negative outlook on life. He responds with a dry, irrelevant explanation of TULIP, the five points of Calvinism. Schrader takes this opportunity to poke fun at the tradition he grew up in and to poke fun at his memories of Calvinists.

Dr. Richard Mouw sees the humor in this scene and uses it to springboard a discussion of Calvinism. “I believe that TULIP, properly understood, captures something very central to the gospel. And I want to bring that gospel to Niki and her kind” (14). This book is an examination of Calvinism and an attempt to answer the question, “What does Calvinism have to say to our present world?”

This book is not a detailed examination of Calvinist thought. It is not an apologetic for that system of thought. Rather, it is a series of reflections upon the doctrines known as Calvinism as well as the type of Christian these doctrines seem to produce. Mouw relates much of his story and the experience of people he has met with as he attempts to affirm these doctrines, and yet to challenge those who adhere to them. After spending a chapter providing a primer on the five points, he returns to the doctrine of particular redemption (or limited atonement) and suggests that this is a doctrine that, while true, should be easily shelved for the sake of unity. He does not seek to resolve the tensions that seem to exist in Scripture between a general and a particular atonement. This spirit of what may be either charity or compromise, depending on perspective, foreshadows what is to come.

In a chapter entitled “Not A Stranger,” Mouw digs into the issue of suffering. Following the teaching of several Rabbis, he suggests that Christians are permitted to address God in a way that many may feel is irreverent or even blasphemous. “God ordains/permits everything that comes to pass, but we don’t simply have to accept that fact. We can complain to God rather vigorously about the things we have a hard time accepting” (51). He concludes this chapter by affirming that God is not a stranger, but a friend. Thus, while we may question Him and His motives, we can take comfort in the fact that it is no stranger we are dealing with.

The next couple of chapters encourage Calvinists to consider not only how they were saved, but what they were saved for. Mouw also examines “Kuyperian” Calvinism (Calvinism influenced by the teaching of Abraham Kuyper).

Chapter eight suggests that Calvinists, rather than focusing on the idea that only a select few will be saved, should believe that the wideness of God’s mercy will cause a great multitude to be saved. Unfortunately, this leads him almost into universalism. He discusses a friend, a rabbi, who “because of what he knows about a rather shameful history of Christian persecution of the Jews may not be capable of focusing clearly on the true person of Christ” (90). He believes that his friend will be saved, even if he never turns to Christ in this life. While he is not sure of this, he considers it a hunch, and clearly a firm enough belief that he is willing to publish it. While Mouw declares the importance of Calvinist doctrine, he also downplays theology that is directly opposite to it, for a couple of chapters later, he mentions that, if Niki ever becomes a devout Roman Catholic, that would be okay with him as a Calvinist. He suggests that this understanding of Calvinism that stands opposed to Catholicism is generational and that we can now move past it.

While I applaud Mouw’s attempt to reflect upon his theology and to reconcile faith with practice, it seems that he is only too willing to create a type of Calvinism that is in many ways opposed to historic Calvinism. In recent days Dr. Mouw has been influential in a whole new type of ecumenism which attempts to build bridges between even Protestants and Mormons. While building a personalized brand of the Christian faith may be all the rage today, I don’t find any biblical warrant for doing so. Truth is truth and error is error. Sadly, Mouw seems to be willing to embrace both.