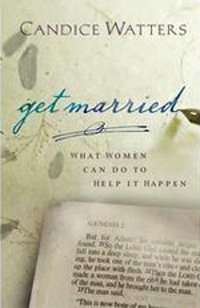 Buy from Amazon
Candice Watters’ professor just about blew her mind. “I was sitting in class learning about all the ways our country was slipping from its constitutional foundations. And in a moment of exasperation, I raised my hand and called out, ‘So what’s the solution?’” It wasn’t what she expected. Her professor told her to get married, to have babies, and to do government (and in that order, too). Here she was, in grad school pursuing a master’s so she could head to Washington and fight for the traditional family. Yet here she was told that she was going about it all wrong. It all comes down to math. “The people who form families, who raise children and send them into the next generation, are the ones who will influence where our government and culture go in the future.” The conversation soon turned in a different direction, but she was changed; she was transfixed. She began to believe that she, too, could and should be married.

For all the women who struggle as Watters did, she offers this book. “It’s for all the women who long for marriage but are afraid to admit it, embarrassed by their deepest desires, or concerned that maybe they want it too much. It’s for the parents of single women who wonder if there’s anything they can do to help. And it’s for married friends of singles who want to help but don’t want to intrude.” The book’s message is as simple as its title. Get married. That’s the way God wants it.

Watters, who founded the Boundless.org webzine for Focus on the Family and who continues to contribute to it, takes the position that almost everyone is called to marriage—marriage is normative except for a very few. Many Christians, and too many probably, believe that singleness and celibacy are one and the same. But they are not. Celibacy is for the celibate—for those God has specially gifted so they may be set aside for service to Him. Those who desire marriage or who desire sexual relationships are not so called and ought to pursue marriage.

This book offers a way to live like you’re planning to marry. This does not mean clipping pretty dresses out of wedding catalogs, stuffing a hope chest, or entering the Christian equivalent of the myriads of dating shows. Rather, it means making some lifestyle changes and may mean rethinking singleness, marriage, and even men. It means living in expectation of marriage. And do that end, Watters provides a good deal of useful and practical advice.

As a man and as a married man at that, the book was certainly not written for me. Yet I found much in it that was valuable and I enjoyed reading it, and particularly enjoyed the author’s insights into the potential dangers of thinking like our culture thinks when it comes to marriage. The book has many valuable insights and corrections to the way people often think. When writing about a potential danger of aiming too high, of living a long and enjoyable life as a single before settling down, she writes, “Ironically, when you don’t need a man, your expectations for what a husband should be go up.” She deals well with the challenges that may arise when a husband and wife have both become firmly established in their single ways. She also writes well about the concept of “soul mates,” an idea that has brought about a great deal of pain and unhappiness. Too many people become convinced that God has set aside a single soul mate for them and that they will only ever be happy with this one person. Needless to say, this sows the seeds of doubt about whether the person they are with is really “the one.” In a lengthy appendix Watters answers many questions about establishing relationships, choosing a mate, and life planning.

If this book has a weakness (other than describing Mother Teresa as a “heroic single”—Come on, fellow evangelicals, it’s time to get over her!), it is the same one I’ve found in other similar titles (such as Debbie Maken’s Getting Serious About Getting Married—it offers little comfort to those who truly desire to be married but who have not been blessed with a spouse. It may make it seem almost too easy—yet there are many women who will testify that, despite desire and effort, they have been unable to marry. I can see that a book like this might exacerbate the pain some such people may already feel.

Get Married is a book about living like you’re planning to marry. Watters offers biblical wisdom and hard-won experience to encourage women to live like they wish to marry. She shows that marriage is a good and worthy goal and one that may not be too far off. The book will be a challenge and encouragement to any woman who desires to get married.