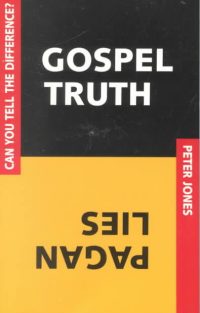 Pagan influences are everywhere in our culture. They are often, perhaps even primarily, unnoticed as we have become so attuned to them. Where God tells us to worship Him as the Creator, all paganism is based on somehow worshipping creation. Peter Jones has written this little book, Gospel Truth / Pagan Lies to show some of the many pagan influences in our society. He contrasts them with the truths of the gospel as summarized by the five solas of the Reformation.

The pagan influences he identifies are:

The author does a capable job of pointing out the main pagan influences on our society and does an interesting job of contrasting them with the truths of the Bible. While I found his comparisons a bit “forced” it does make a fascinating contrast between Christianity and other religions. My only real concern with the book is that I do not quite know who it would appeal to. I suspect most Christians would be familiar with the bulk of the material and the points are not well enough defended to convince unbelievers. Despite this, it is an interesting book and receives my recommendation.