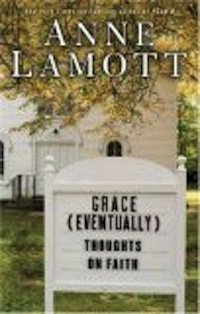 I really don’t understand Anne Lamott’s appeal. I’ll grant that she is a talented writer but clearly this, in an of itself, cannot explain it. I suppose a good bit of her appeal probably stems from her gut-honest authenticity, her willingness to say exactly what she’s thinking all the time. She’s profound, she’s profane, she’s shocking and people seem to love her for it.

Her latest nonfiction book (she has also authored several novels) is entitled Grace (Eventually) and it is a series of essays. As such it is somewhat disjointed with incomprehensible section names and odd chapter titles. There is little cohesion. If there are common themes they revolve around some kind of faith in Jesus, the trials of being a single parent, the difficulties that come with life, and an overwhelming hatred of George W. Bush (along with various members of his administration) and everything he has done as President. I haven’t done a word count, but I suspect the name Bush appears significantly more times than the name God (unless, perhaps, we also count the times she uses God’s name in a profane way; that would even things up some.). The essays recount episode after episode where Lamott was depressed or angry or belligerent or foul-mouthed or, in many cases, all of the above. It’s exactly as depressing as it sounds.

This excerpt, drawn from the beginning of a chapter, is quite typical of the book’s content:

I woke up in a bleak place on Sunday. It was not the place of ashes, like the morning after the 2004 Presidential election, but there was no comfort anywhere. It was miserably hot, and the news couldn’t be worse–a new crop of mutilations in Iraq, with 2,500 U.S. soldiers now dead, and a North Korean ICBM apparently pointed at the West Coast. Two of my dearest friends had terrible diseases. There was a nasty separation going on in our family, and a small distraught child. Also, my son had not obeyed his curfew and we had had words at two a.m.

In the face of all this, I did the most astonishing thing a person can do: I got out of bed. At least I could still walk. A better person would think, Thank you, Jesus. But I thought, God do my feet hurt. God, am I getting old. Then I had some coffee, to level the playing field of me and my mind, as it had had several cups while I slept, and now if felt like talking.

Then I headed to church.

And it was not good.

Lamott has proven to have wide appeal, writing for Salon, the Los Angeles Times and a variety of other periodicals. It should be exciting to see a professed Christian writing for what is clearly a largely secular audience. Sadly, though, the spiritual insights shared by Lamott are more shocking or embarrassing than exciting and inspiring. Here is a smattering of what the reader will discover:

As we’ve come to expect from Lamott, there is a handful (or two) of uses of profanity spread throughout the book (using the name of God casually, several uses of language of the four-letter variety, and so on). Of course the book is not without its interesting insights. Readers will be able to identify with many of the difficulties Lamott has faced. They will laugh at some of her reactions to the situations she has encountered; they will roll their eyes at the same things that frustrate her. There are some notable quotes like this one: “A good marriage is supposed to be one where each spouse secretly thinks he or she got the better deal.” But when it comes to spiritual content that is distinctly biblical and profoundly Christian, well, there is not much at all. Lamott seems to embrace a very wide faith that extends far beyond the bounds of Scripture. She celebrates things the Bible forbids and hates things the Bible commands us to love. Her self-loathing is so prominent it is easy to wonder if it isn’t simply narcissism weakly disguised. In fact, with a fair bit of faith talk, but very little that is distinctly Christian, I suppose it is not difficult to understand why this book has wide appeal outside the church. I hope Christian readers are discerning enough to ensure it has little appeal within.