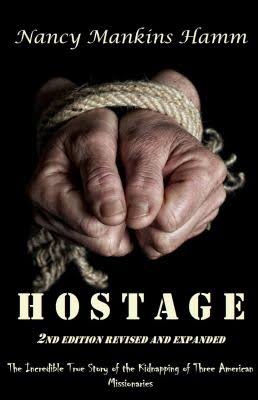 Hostage tells the story of the kidnapping of three American missionaries from a tiny village in the Panamanian jungle. The book is written by Nancy Mankins, wife of Dave Mankins, who along with Mark Rich and Rick Tenenoff was kidnapped by Colombian rebels.

The book continually alternates between the day of the kidnapping and the years of preparation that led the Mankins family to become missionaries to the Kuna tribe. We learn about their call to mission work, the decision to leave their life in America and move to the jungles of South America, and the life they built there. We learn about the trials and challenges they faced in trying to adapt to a culture vastly different from their own. The story culminates, of course, in the events of January 31, 1993 when rebels burst into the tiny village and kidnapped the three missionaries.

As with most missionary stories, it is inspiring to read about Christians who are so dedicated to God’s work that they will leave all the comforts of society to bring the gospel to those who have never had opportunity to hear it. In my view missionaries, God’s most humble and unseen disciples, are the true heroes of Christianity – far above the public figures we love to praise.

My only real disappointment with the book is that it really isn’t a book about hostages at all. The back-story and the story of the day the men went missing fills almost the entire book, leaving just a few pages to tell the little bit their wives know about what happened to the men. Other than that small complaint, I enjoyed Hostage and would recommend it.