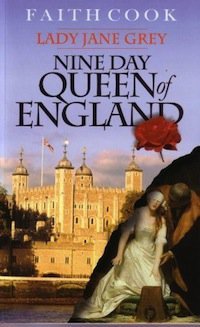 Buy from Amazon
“Kneeling down on the hard wooden scaffold, Jane turned to Feckenham who stood by her. ‘Shall I say this psalm?’ she faltered. Overcome with emotion, the priest who had tried so hard to save Jane from this moment, could scarcely reply. After a moment’s pause, he simply said, ‘Yea.’ Jane then began to repeat Psalm 51 in English, David’s great prayer of contrition…A deep silence rested over the sad scene, nothing could be heard except for the quiet sobbing of her lady attendants. Hardened soliders who had witnessed brutality many times before stood without moving…Bracing her body to receive the impact of the blow, Lady Jane called out in a clear voice, ‘Lord, into thy hands I commend my spirit.’ With a stroke, swift, sharp and terrible, Jane’s short life was ended” (page 200-201).

So ended the life of a bright light in a particularly dark and strange period of English history. In a time when the Catholic powers were trying to exterminate the new Reformed teaching, the two potential rulers who seemed most likely to increase the Protestant faith both came to an early end. Edward VI, only a teenager, died following a long bout with tuberculosis. Edward was a strong Christian and committed to the expansion of Reformed Protestantism. He attempted to bypass his half-sister Mary, an ardent Catholic, who was next in line to the throne and hand it instead to Lady Jane Grey, a friend and sister in Christ who was committed to Protestantism. Lady Jane, under great pressure from her family agreed, but did so only with the greatest reluctance. The attempt quickly failed and Mary came to the throne, bringing with her a time of terrible persecution against Protestants. Lady Jane was one of those who died during this time of great conflict. Why God chose to allow this to happen – why he would allow two strong Christians to perish in order to usher in a reign of terror and persecution – is beyond our reckoning. Truly His ways are not our ways.

Lady Jane Grey by Faith Cook, is the story of Lady Jane, who is known as the nine day queen of England. The author seeks to portray Lady Jane as someone who was more than a mere pawn in the hands of powerful men, but was a young lady of starting intelligence and strong faith. Cook feels that Lady Jane’s treatment in history has been unfair, and has assigned to her far too little credit. To understand her, we must first understand that dark period of British history, and the author provides the information necessary to properly see the tragedy unfold. The strength of this young woman’s faith is incredible, that one so young could know so much.

Even when offered a chance to save her life, she refused to accept Catholic teachings. Even when befriending a priest, the only person allowed to provide religious counsel during her final days, she did not hesitate to challenge him on his erroneous beliefs. Even when she had been thrust into a position which was not rightly hers, she accepted full responsibility for her sinful actions.

Because this story cannot be separated from the period of history in which it happened, the author has to spend a fair amount of time teaching history. She does so with clarity and precision, never allowing the narrative to become broken. She successfully combines history with biography in telling the story of an admirable Christian woman. Cook aptly summarizes the importance of Lady Jane’s death. “Like the apostle Paul, she had fought a good fight, finished the course and kept her faith. Henceforth there was laid up for her a crown of righteousness – a crown none could take from her” (page 201). Lady Jane stands as an inspiration for her strong stand for what she knew to be right. This book is informative, moving and most importantly, inspiring. I thoroughly enjoyed this biography and am more than happy to recommend it.