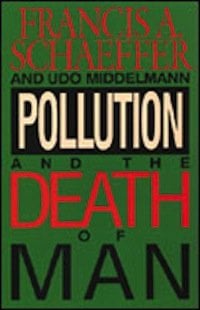 Buy from Amazon Buy from WTS Bookstore
In the past weeks I have spent some time wrestling with issues related to the environment and creation care. I have been seeking distinctly Christian wisdom on this issue, seeking to learn how we, as Christians, are to understand this world and our role in its care and protection. Last week I turned to Francis Schaeffer’s Pollution and the Death of Man hoping and even expecting that it would answer some of my deepest questions.

Schaeffer acknowledges from the beginning of this book what our society’s secular humanists cannot—that mankind has been called by God to exercise dominion over the earth. But like everything else in this world, man’s ability to exercise such dominion has been affected by the Fall. No longer do we tend the world always in love, but instead we ravage and pillage it. Though we may not believe in all of the dire claims being made about the world today, we must at least acknowledge that we have not cared for the world as God has called us to.

The answers to this crisis lie not in our own efforts and not in the dictums of former Vice Presidents. Rather, if we are to understand the crisis, its roots, and its solutions, we must turn to Scripture. And this is precisely what Schaeffer does in Pollution and the Death of Man. Originally published in 1970, the book reads as if it was written yesterday (if the reader is willing to replace the ecological crises of thirty years ago with those of today, perhaps substituting global warming for DDT). Schaeffer looks at the spirit of the day and sees how men are dealing with ecological issues. Perceptively, he sees that ecology, bereft of any firm, biblical foundation and without any consistent basis for morality, is breeding a kind of pantheism. Men deal with the environment by making themselves one with it and it one with them. He launches into what I’d consider classic Schaefferian thought: “Pantheism,” he says, “will be pressed as the only answer to ecological problems and will be one more influence in the West’s becoming increasingly Eastern in its thinking.” Almost forty years later, his words are proving true. “The only reason we are called upon to treat nature well is because of its effects on man and our children and the generations to come. So in reality…man is left with a completely egoistic position in regard to nature.” “Having no absolutes, modern man has no categories. One cannot have real answers without categories, and these men can have no categories beyond pragmatic, technological ones.” “A pantheistic stand always brings man to an impersonal and low place rather than elevating him.” In the end, pantheism pushes both man and nature into a kind of bog, leaving us unable to make any kind of necessary and rational distinctions.

After looking at a few alternative inadequate answers to pantheism, Schaeffer turns to the Bible to give the Christian view of creation care. He affirms that our understanding must begin with the world’s creation when God created things that have an objective existence in themselves. Despite the claims of pantheism, creation is not an extension of God’s essence. It is only the biblical view that gives worth to man and to all that God has created. Nature begins to look different when I understand that, though I am separate from it, I am related to it as something God has created. “So the Christian treats ‘things’ with integrity because we do not believe they are autonomous. Modern man has fallen into a dilemma because he has made things autonomous from God.” As we love the Creator, we love the creation.

Schaeffer next looks to “a substantial healing,” saying, “we should be looking now, on the basis of the work of Christ, for substantial healing in every area affected by the Fall.” As Christians we should be ones who are treated creation now as it will be treated in eternity. The problem, of course, is that “by creation man has dominion, but as a fallen creature he has used that dominion wrongly. Because he is fallen, he exploits created things as thought they were nothing in themselves, and as though he has an autonomous right to them.”

The book’s final chapter brings a few points of application, though they are more high level than practical. Still, they are insightful. “We must confess that we missed our opportunity. We have spoken loudly against materialistic science, but we have done little to show that in practice we ourselves as Christians are not dominated by a technological orientation in regard either to man or nature.” “If we treat nature as having no intrinsic value, our own value is diminished.” Ultimately, we treat nature well because we are all products of the loving Creator; we are all creatures together.

While Pollution and the Death of Man is one of Schaeffer’s lesser-known works, it is one Christians would do well to read and study even today. In this book Schaeffer does what he does best, providing a logical, consistent, biblical response to a matter that really matters.