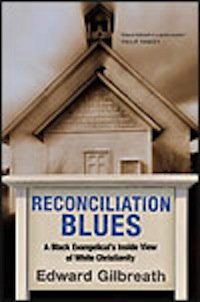 Buy from Amazon
I often wonder if my Canadian perspective keeps me from really understanding race relationships as they exist in the United States. Things are different here. I live in a city where over half of the population was born outside of this nation. A trip to any public location (or even a walk around the average neighborhood) will show an incredible variety of races and backgrounds and this seems to have been Canada’s historical pattern. To be Canadian is to be diverse. Canada never embraced slavery and never had shockingly unjust Jim Crow laws to overcome. We had no Martin Luther King Jr. and, in a sense, never had as great a need for one. Racism was never systematized here as it was just a few miles south. So when I read about racial issues I read about something that comes from outside of the context I know best.

Reconciliation Blues is, according to the subtitle, “A Black Evangelical’s Inside View of White Christianity.” The author, Edward Gilbreath, editor at large for Christianity Today, has written this book to give a glimpse of what it means to be both black and evangelical. “My hope,” he writes, “is that this inside perspective on what I regrettably call ‘white Christianity’ can help both blacks and whites get a better sense of the condition of our racial reconciliation and the distance we need to travel to make it something more authentic and true.”

This book weaves together several elements: Gilbreath’s memoir, particularly as it pertains to his race, biographies of prominent black reconcilers such as Martin Luther King Jr. and Jesse Jackson, philosophical musings on what reconciliation means to the church and whether it is even still necessary, and discussions of elements as diverse as music, politics, and the “whiteness” of evangelical institutions. It is, in a sense, a series of essays in which the author wrestles with the desire to embrace both his race and his evangelical beliefs. It is a book that celebrates the successes that have come, but laments the fact that much work remains.

And that, in essence, is what this book is about–the loneliness of being “the only black,” and the frustration of being expected to represent your race but still being stifled when you try, the hidden pain of being invited to the table but shut out from meaningful decisions about that table’s future. These “reconciliation blues” are about the despair of knowing that it’s still business as usual, even in the friendly context of Christian fellowship and ministry.

I found Reconciliation Blues most valuable as a perspective on the experience of one man as he comes to terms with both his race and his religion–what it is like to be a black evangelical in the church today and to want to embrace both of those aspects of his identity. It surprises me to hear that this is more difficult than it may appear. The book gave me much to think about, and especially how about I, as a white Christian, may well not even realize how much my “whiteness” affects my faith. It is interesting food for thought to consider how much of the white evangelical experience is a product of being white and how much is directly biblical. Take this quote, for example:

The first thing I learned in Sunday school was that black is the color of our hearts without Jesus, red is the color of Jesus’ redeeming blood, and white is the color of our cleansed hearts after we accept Jesus as our “Lord and Savior.” There were even visual aids, construction paper cut-outs, that demonstrated the red blood washing away the black sin to reveal a brand-new white heart.

Have we ever considered the potential ramifications of portraying black as evil and white as pure and good? Is this portrayal a cultural preference or divine fiat? Is there a better or more sensitive way of expressing good theology but in using word pictures that do not offend as this one might? And if the evangelical outworking of the Christian faith really is to at least some extent a product of our “whiteness,” what do we stand to gain by embracing more diversity?

The book can be provocative at times. For example, speaking of Jesse Jackson (and man who, according to Gilbreath, captures both the good and bad aspects of racial reconciliation in America) he writes, “In general, the African American Christian community has been more forgiving of its fallen members. Though few whites will admit it aloud, this is one of the things that sustains the fissures between black and white believers–the impression that blacks are lax morally, that they too easily excuse sin or fail to take responsibility for their behavior.” This is more food for thought, an example of where white Christians may harbor subtle beliefs that influence the way they think of their black brothers and sisters in Christ.

Reconciliation Blues is a book that deals more with questions than answers, more with describing the current state than providing concrete suggestions for the way forward. Gilbreath is clear in stating that he believes racial reconciliation needs to remain a priority for the church. I trust that this book will at least cause people to think and to consider how they may have, however inadvertently, contributed to the problem and how they can now work towards a solution.