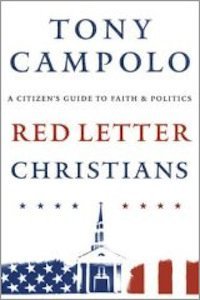 There are some people who will probably read no further than the title of Red Letter Christians, the latest offering from Tony Campolo. The reference to Red Letters will no doubt convince people, even before they read the book, that it is a defense of ignoring the black letters of the Bible (which is to say, most of the Bible) in favor of the red words (the words actually spoken by Jesus). While I, too, am somewhat uncomfortable with the term, it is only fair to allow Campolo to define it before passing judgment!

“A group of us who are speakers and authors and who share an evangelical theology got together and confessed that we have a hard time applying the label [Evangelical] to ourselves anymore. Among those who gathered were Brian McLaren, Richard Rohr and Jim Wallis. They settled on the name “Red Letter Christians” as an alternative to evangelical. “In adopting the name, we are saying that we are committed to living out the things that Jesus taught.”

According to Campolo, Red Letter Christians…

The focus on the red letters means that they will seek to look to the red letters as their guide to understanding the black. They will look first to Jesus before Paul or any other biblical author. This leads to a concern with social justice. Campolo says that poverty is a major concern to Red Letter Christians and he makes the clear throughout the book. From reading this book I’d actually conclude that it is the predominant concern.

I’m not so sure that Red Letter Christians are entirely fair to Evangelicals. At one point Campolo draws what is clearly a caricature of Evangelicals saying, “There are Evangelicals who argue against environmentalism, claiming that global warming is a myth (or at least grossly exaggerated), and that environmental concerns distract Christians from those matters that should fully occupy our moral and political attention: gay marriage and abortion.”

Related to the concern with social justice is a concern with politics, for the two tend to go hand-in-hand. As Christians involve themselves in the political process, they can guide their nations to policies that will promote social justice. The stakes are high, says Campolo, for “On the day of judgment, the Lord will not ask theological questions so much as He will ask if we fulfilled our social obligations.” Campolo anticipates, probably rightly, that some will hear this and immediately cry “liberalism” and he responds in advance, carefully stating that this movement cannot be easily and conveniently labeled as liberal or conservative. “Conservatives maintain many lines that should never be crossed, while liberals destroy many lines that should never have existed.” Instead, this movement seeks to be guided by Scripture. “Challenging the popular image of Evangelicals is one of the purposes of this book. I want it to be known that there are millions of us who espouse an evangelical theology, but who reject being classified as part of the Religious Right. We don’t want to make Jesus into a Republican. On the other hand, we want to say loud and clear that we don’t want to make Jesus into a Democrat, either.” Red Letter Christians can and should take their place in all and any political parties that are democratic and egalitarian. This book seeks to help the reader understand how Red Letter Christians will think about and react to a variety of social and political issues.

And so Campolo seeks to lay out a biblical approach to politics and, in the book’s second chapter, outlines what this means. Red Letter Christians believe that Jesus Christ has initiated His new kingdom and this kingdom is made up of transformed people living in a transformed society. When we preach this message, he says, we are preaching the gospel. The primary way God uses the church to usher in the fullness of His presence in history is “by commissioning its members to serve in each and every social institution … and, like leaven and salt, to permeate these institutions with Kingdom values. Being in all the world, living out the love of God, working for justice whenever opportunities arise, and talking about how God is impacting their lives are the activities that make ordinary Christians into effective change agents, and together living the fullness of the presence of God.” How this gospel can be held as being consistent with the gospel of the historic church and its creeds escapes me, for this seems to be a gospel that is far more about social justice than about the substitutionary atoning death of Jesus Christ.

The bulk of the book, seventeen chapters, looks at a variety of timely Global Issues (the environment, the war, Palestine and AIDS), Hot-Button issues (gay rights, gun control, education, abortion, immigration, crime), Economic Issues (the federal budget, the minimum wage, debtor nation, wasteful government) and Government Issues (political lobbyists, campaign finance, the right kind of candidate). It really applies mostly to Americans as many of the issues are specific to the United States. Others are more widely applicable but are set in an American context. The book seeks to give a biblical, Red Letter perspective on each. “I hope that this book challenges the reader to develop his or her own perspectives, and encourages him or her to use biblically based critiques to examine the pros and cons of contemporary political debates.” In some cases, Campolo succeeds as he looks to Scripture as a guide to our response to various issues. In other cases he seems to miss the mark entirely, stating his beliefs without reference to Scripture or drawing on Scripture only very narrowly. Yes, it is important to look to the words of Jesus as we seek to understand how we are to live in this world, but looking only and sometimes even primarily to the red letters may mean we are ignoring ones which would further explain or further interpret. It may mean we are ignoring the full testimony of Scripture.

Because of the variety and importance of the topics he tackles in Red Letter Christians, it is unlikely that many people will agree with him in every point he makes. But that is not meant to be the point of the book. Rather, the purpose is to help people think both critically and biblically about each of these issues. And in that regard I feel the book falls short. If you happen to care what Tony Campolo thinks about gun control, abortion, immigration, the environment and a long list of other issues, this book may have some appeal. If, on the other hand, you are hoping to find someone to model biblical thinking about these same issues, you will want to look elsewhere. Though Campolo’s perspectives are often interesting and often align with my own, I simply do not find that he consistently models biblical thinking or biblical discernment.