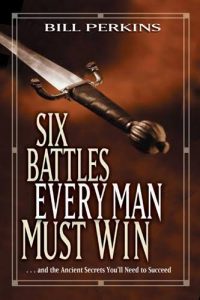 Buy from Amazon
There are few things I like less than Christian books and programs that offer easy answers, for nowhere does God promise that living for Him will be easy. It seems, though, that the Christian world just laps these books up. Those dealing with Christian living seem to be particularly prone to “easy-answerism.” Fortunately bestselling author Bill Perkins avoids this concern in his new book entitled Six Battles Every Man Must Win. Based on the Biblical account of King David’s mighty men, this book seeks to address the cultural bullies that continually attempt to steal men’s hearts. Perkins offers insight on how men can set their sights on God’s will for their lives and escape the destructive behavior that is keeping them from being warriors for Him.

For many years our society has told men to cultivate their gentler side and to suppress masculine distinctives. After many years this influence has begun to shape men’s identities. Satan builds on this doubt, this disillusion, doing all he can to convince men that they are not warriors at all and that they can play no part in the spiritual battle that rages in this world. Six Battles Every Man Must Win serves as a wake-up call to men who cannot or will not see this conflict.

“We must wake up. We can no longer deny the reality of the angelic conflict in which we’re combatants. We have an enemy who hates us and seeks our destruction. As God’s warriors we must live as though nothing else matters compared with knowing him and fighting at his side. We must discover the secret of masculine strength that’s rooted in Christ.” (page 14)

Churches, rather than combating the emasculation of men, has contributed by molding the church to create an atmosphere that appeals to women more than men. This process began when men started to forsake their role as the spiritual leaders in the homes and it soon spread to the church. Even Jesus has been given an “extreme makeover” so that those characteristics he no-doubt possessed that women object to have been downplayed in favor of His gentleness and compassion. As this has happened, the church has ceased teaching godly masculinity so men are unable to resist our society’s misconceptions about manliness. The two greatest deceptions are that you are what you own and that you medicate pain with sex. When men lose sight of God’s standards for manliness and adopt the world’s standards, they give Satan exactly what he is looking for – their hearts. So what are men to do? They are to stand their ground! “Recognizing you are engaged in a spiritual battle and deciding to stand your ground are crucial first steps.” (page 35)

The subsequent six chapters outline six battles every man needs to face in order to win this spiritual battle. The battles are: Fight for your identity, fight for personal holiness, fight for your family, fight through pain, fight for your friends and fight for a strong faith. Each chapter is based around the struggle and triumph faced by one of David’s mighty men. Perkins draws practical, Biblically-sound application from each of their victories. The author avoids attempting to provide easy answers. Like any battle, the battle for holiness of character can be won only through great effort. Instead of easy answers, he provides a solid base of application the reader can build on as he acknowledges and then joins the fight.

The book closes not with final answers, but with a final challenge. “…enlist right now to fight in the six battles and discover firsthand how God can transform you and use you to strengthen your family and other men. The battle is raging as you read these words…Grab your sword and enter the fight.” The book ends with a challenge to begin living a life of greater holiness before God; a challenge to commit my life, my time and my efforts to His cause. It ends with a call for me to be the warrior God intended me to be so that with His help and for His glory I can win the battle that rages all around me and defeat the one who seeks to steal my heart.

If I had to find a complaint about this book I would say that I was a bit disappointed that it was merely 140 pages long. Several of the chapters provided only an introduction to a topic that I would have liked the author to examine in greater detail. Of course many of the chapters could (and sometimes have been) books of their own so this is probably not practical. I would also have liked to see more exposition of the passage the book is based on. Though most believers have some level of knowledge about David’s life, I’m sure many of the references will be lost to readers. Before reading the book I would recommend reading at least 2 Samuel 23: 8-23. For the full story one would have to read most of 1 and 2 Samuel.

Two things that initially drew me to Perkins’ books are his honesty and passion. He draws on many incidents from his own life, being sufficiently honest to use his experiences as examples of behavior others should avoid. He writes with such passion that I could feel the genuine desire he has to see men emerge as the warriors God intended them to be. His passion is contagious.

A book that provides many “aha” moments (as promised on the cover) as well as many opportunities for reflection and discussion, I would recommend this book to men who are seeking to honor God with their lives and are willing to accompany Him into battle.

The book will be available online and in Christian bookstores in April of this year.