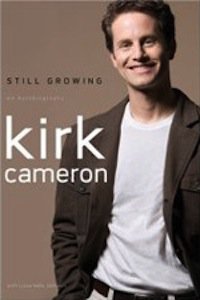 Buy from Amazon
I missed out on the Growing Pains phenomenon. Because my family had no television while I was growing up, the Seaver family largely passed me by. I caught occasional glimpses of the program but little more than that. It was only recently that I learned the show had propelled Leonardo DiCaprio’s illustrious career. The truth is I know more about Cameron’s post-sitcom career than the years he spent as Mike Seaver, one of television’s best known and most loved characters. And it was those years that was my primary interest as I read Still Growing, Cameron’s newly published autobiography.

Of course I couldn’t help but enjoy reading about his early life, and the Growing Pains years in particular. While I may not have known much about Cameron in my younger years, I do know that I would have given just about all I had to trade places with him. What boy wouldn’t want to be the teenage heartthrob whose face graced the cover of dozens of teen magazines? What boy wouldn’t dream of the fame, the fortune and the attention that were Cameron’s? He spent his life in a strange bubble where even adults hustled to grant his every desire and where his whim was the command for countless grown-ups. He received 10,000 fan letters every week and was the center of attention wherever he went.

Here is how he describes his life at the pinnacle of his fame:

I received 10,000 letters per week, mostly from girls who wanted to meet me, touch me, marry me. I had a fan club that sent out a variety of keepsakes—photos, Tshirts, buttons, even a pillowcase with my picture just the right size for girls to kiss my fabric-y likeness as they drifted off to sleep. Weird.

Wherever I went people catered to me. Limousines carted me off to the next gig. Waiters comped my meals. Flight attendants whispered, “Mr. Cameron, why don’t you come with me?” and escorted me to first class. Once off the plane, people laid down a red carpet and greeted me on the tarmac with military-like fanfare.

When I arrived at a party, everyone sat up and took notice. The room buzzed with not-so-quiet whispers: “Isn’t that Kirk Cameron?” The adoration was obvious in the body language, facial expressions and eagerness of those around me. All of it baffled me beyond belief. I was in the midst of a phenomenon I felt I had no hand in creating.

I had everything the rest of the world craved—money, fame, fortune, any girl I wanted. I admit, I liked that part. What 16-year-old guy didn’t want girls to melt when he walked in the room? And I certainly wasn’t complaining when Domino’s Pizza offered me a million bucks to be their ad boy.

If I didn’t have something, it was only because I didn’t want it. I was a devout atheist, livin’ large, hanging out with the beautiful people.

Years later when people asked about that time in my life, I defined it like this: Imagine a world where whatever you want is given to you as quickly as possible. When you walk into a room, all the adults smile at you, talk nicely and say, “What do you want? Okay, I’ll give that to you.”

Everything in your life is carefully placed with the intent to make you happy. If you aren’t happy, no expense is too great in order to fix the situation. As far as you can tell, you are the center of the universe. Everything revolves around you, your schedule, your dreams and wishes. You are more important to adults than other kids are. “Why is that?” your little mind asks. And the only answer you can come up with is that you are very, very unique.

But the reality was far different from the boyhood fantasy. He was noticed everywhere he went, unable to enjoy peace outside of his home; he had to grow accustomed to strangers blurting out that his pimply teenage skin was far worse in real life than on television; he was stalked by a demented pedophile; though girls swooned in his presence, he was lonely and sometimes despaired. Life in the public eye was not the dream it may have seemed.

You know, of course, that Cameron became a Christian. At the age of seventeen he came to know Christ through the family of his first girlfriend (and the only girlfriend he had before meeting his wife, Chelsea, who was a guest actress on the show). Here is how he describes that experience:

A month after my first visit to her church, I dropped my friend off at her acting class in the San Fernando Valley. As I pulled away, something flashed through my mind: I’m part of the ultimate statistic: 10 out of 10 people die. I’m going to die one day. If it were to happen in the next 10 minutes—if I were to get in a car accident and die—what would happen to me? The thought overwhelmed me. I felt smaller than a speck of sand.

I pulled over to the curb and turned off the engine. If there is a God and a heaven, there’s no reason He should let me in, I told myself. I had gotten past the intellectual barrier to God, but I knew there was a bigger stumbling block that stood between me and my Maker. It was not intellectual, but moral.

I knew that because of my prideful attitude and the way I had intentionally ignored—even denied God—especially in light of the good things He had given me, I wouldn’t go to heaven. Instead of loving God, I had mocked the Giver of all that was precious to me. Deep in my gut, I knew my arrogance and selfishness were an offense to God. Without ever having read the Bible, I intuitively knew that I was a walking violation of the first and greatest commandment: I had failed to give the Creator due honor and respect.

I was sure that if I died on Van Nuys Boulevard that day, God would be perfectly justified to exclude me from heaven and instead give me whatever I deserved.

I wanted to pray, but didn’t know how. Closing my eyes—hoping no one was watching—I muttered, “God, if You’re there, will You please show me? If You’re real, I need to know. And would You please forgive me for the things I’ve done that are wrong? I don’t want to join a religious cult or believe in a fairy tale, but if You’re there … I want You to change me into the person You want me to be.”

Cameron now lives in life after the spotlight. He is known as one of those actors who found God, condemned Hollywood, and fled for the hills. The reality, he explains is different. He speaks honestly about the mistakes he made in the weeks and years immediately following his conversion to Christianity—decisions that ultimately threw up a wall of separation between himself and the rest of the cast members and between himself and the producers of Growing Pains. Since he left the show he has returned for two reunion shows and has asked forgiveness from those he wronged.

Life after Growing Pains has been good. Cameron is now the father of six children (four of whom he and his wife adopted) and he hosts a television show on TBN. He has acted in a handful of movies and will star in a forthcoming film by the producers of Facing the Giants. He and Chelsea are actively involved in Camp Firefly, a camp for the families of disabled children. He works closely with Ray Comfort and appears often on the Way of the Master radio program. Though he has a lower profile, he continues to have a full schedule. He has experienced many blessings.

I can’t say it’s likely that Still Growing is destined to become a classic spiritual memoir, yet it should still find an audience beyond people who still wear “I Heart Mike Seaver” t-shirts and treasure their signed glossies. Though I knew little about Cameron before cracking the cover of this biography, I feel as if I know him much better now. This is a personal, intimate look at his life, though not one that is exhibitionist. He maintains that balance of sharing the joys and triumphs of life without delving into gossip and ugly detail. I still don’t heart Mike Seaver, but I’ve certainly come to respect Kirk Cameron. Here’s hoping this is only the first chapter of a life lived for the glory of God.