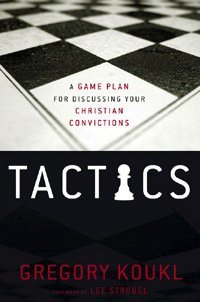 Buy from Amazon
I have a bit of an aversion to books on apologetics. I don’t know exactly why this is, but it may be that many of them seem to teach methods of defending the faith that either manipulate or bludgeon. Somehow grace and apologetics do not seem to go together as they ought. So it was with perhaps just a bit of reluctance that I began reading Gregory Koukl’s Tactics: A Game Plan for Discussing Your Christian Convictions. This is a book that promises to teach a new method, a respectful method, of defending the faith and of attempting to convince others of the truth of Christianity. This is not an apologetics 101 text, as in a book that will compare and contrast various apologetic methods; instead, it is a guide, a book that seeks to lead the reader into a new method of sharing his faith with others.

“If you’re like a lot of people who pick up a book like this, you would like to make a difference for the kingdom, but you are not sure how to begin. I want to give you a game plan, a strategy to get involved in a way you never thought you could, yet with a tremendous margin of safety.” Here is what Koukl promises–he sets no small goal. “I am going to teach you how to navigate in conversations so that you stay in control–in a good way–even though your knowledge is limited. You may know nothing about answering challenges people raise against what you believe. You may even be a brand new Christian. It doesn’t matter. I am going to introduce you to a handful of effective maneuvers–I call them tactics–that will help you stay in control.”

This tactical approach is a useful one, for it allows you to stay “in the driver’s seat in conversations, so you can productively direct the discussion, exposing faulty thinking and suggesting more fruitful alternatives along the way.” It is important to note that “tactics are not manipulative tricks or slice ruses. They are not clever ploys to embarrass other people and force them to submit to your point of view. They are not meant to belittle or humiliate those who disagree so you can gain notches in your spiritual belt.” Instead, they are ways of guiding a conversation to expose poor reasoning and then use that as a bridge to the truth.

Then, over the course of four chapters, Koukl unveils his tactic. He calls it “The Columbo.” The key to this tactic is to “go on the offensive in an inoffensive way by using carefully selected questions to productively advance the conversation.” Never make a statement when a question will do the job. When you ask questions and listen carefully, you gather information that can be used to show a person where his thinking is faulty. Questions can be used to gather information, to reverse the burden of proof or to lead the conversation. Either way, the person asking the question is the person who leads the discussion.

He sets a modest and realistic goal for his interactions with unbelievers. “My goal,” he says, “is to find clever ways to exploit someone’s bad thinking for the purpose of guiding her to truth, yet remaining gracious and charitable at the same time. My aim is to manage, not manipulate; to control, not coerce; to finesse, not fight. I want the same for you.” The goal of this kind of apologetics, then, is not necessarily to win someone to Christ. That may be an ultimate goal or an ultimate hope, but the goal of an individual encounter is nothing more than, in Koukl’s words, “putting a stone in someone’s shoe.” “I want to give him something worth thinking about, something he can’t ignore because it continues to poke at him in a good way.”

In Part 2 of the book, Koukl offers guidance in finding flaws in the way people reason. He offers specific tactics to unveil poor reasoning and to turn it back against a person. He calls these things like Suicide, Sibling Rivalry, Taking the Roof Off. He offers advice on countering the human steamroller (you’ve tried to discuss issues with people like this) and the Rhodes scholar, the supposed expert.

When I think of Christian apologetics, I tend to think of Evidence that Demands a Verdict or some of the classics of days gone by. But in this book Koukl offers a new approach and one that is well-suited to the times. He teaches the Christian to think well, to exemplify grace and to humbly lead a conversation to the truth. “We may spend hours helping someone carefully work through an issue without ever mentioning God, Jesus or the Bible. This does not mean we aren’t advancing the kingdom. It is always a step in the right direction when he help others think more carefully. If nothing else, it gives them tools to assess the bigger questions that eventually come up.”

Apologetics is not always a discipline that is done with grace. But in this book Koukl shares tactics that will prove beneficial to any Christian. They may just revolutionize the way you interact with unbelievers. I highly recommend it.