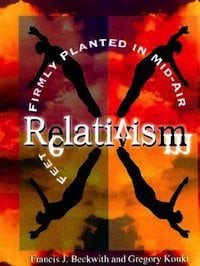 Buy from Amazon
It was the late, great Francis Shaeffer who spoke of a group of people “who have both feet firmly planted in mid-air.” This phrase brilliantly describes people in our society who adhere, as much as anyone can adhere to such a system, to moral relativism. For one can only be planted so firmly on a system that has no foundation. Relativism, written by Greg Koukl and Francis Beckwith, critiques moral relativism and explores the myriad inconsistencies inherent in this position.

The authors launch a five-pronged attack on relativism. In the first part they help the reader understand relativism and see the three different types: “society says,” “society does” and “I say” relativism. In the second part they critique relativism, exposing seven of its most fatal flaws before turning in the third part to an exposure of the impact of relativism on education. In the fourth part they examine relativism in public policy, and specifically its application to homosexual marriage, abortion and euthenasia – three of the pressing issues of our time. The final part provides some tools to refute relativism.

The final part was the one I found most helpful. Having explained the background and dangers of relativism, the authors suggest some tactics that are helpful in arguing against relativism. First, they suggest showing the contradictions inherent in relativism, for in practice, this position is self-refuting. One effective tactic, then, is to show people that many of their positions depend on some type of absolute stance. They suggest the best way of dealing with the charge of “don’t force your morality on me,” is to simply ask “why not?” What gives him the right to impose his morality on you when you are not able to do the same to him? Second, they suggest pressing the person’s hot button. Find that person’s pet issue and relativize it to undermine his position. Third, force the tolerance issue. Force the person to examine why he cannot tolerate what he perceives as your intolerance. And fourth, have a ready defense. Know the issues and know the best ways to defend your position while casting doubts on the relativist’s position.

While a book on this topic could easily become deeply philosophical and difficult to understand, Beckwith and Koukl do a good job of making it accessible. There are a few parts I had to read a few times to thoroughly understand them, but on the whole they write in such a way that they make their points clear without requiring extensive background in philosophy. Several points could have received more attention, but I understand the need to keep the book short enough to be attractive to a wide array of readers. In fact, my only real complaint with the book would be their use of the tiresome cliche of Adolf Hitler representing all that is evil in humans and Mother Teresa representing all that is good. The authors might plead that they use Mother Teresa only because people immediately understand what she represents, but I think it is time we stop using such a poor example of all that is virtuous. Koukl and Beckwith know better.

Relativism is a solid introduction to a topic with which we are all far too familiar simply because it pervades our society. Yet few positions do more to undermine the truth, the “true truth,” of Scripture. It is critical that we have a ready defense of the absolutes that underly the truth of Christianity. This is not the type of book that is likely to change the minds of those who are already firmly-entrenched in their position, but neither is that the book’s primary purpose. This book is a helpful tool to equip Christians in that which we know to be true.