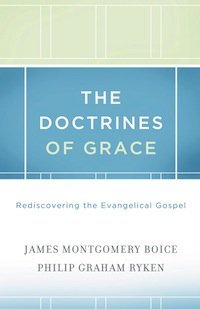 There is any number of books available today that serve as introductions to Calvinism or the doctrines of grace. While some of these leave much to be desired, many of them are excellent and do justice to the topic. One might ask, then, why someone would want to write (or read) yet another one, and that would be a fair question.

What attracted me to this title is that it was the final book written by one of our generation’s great pastors and teachers, James Montgomery Boice. Having been diagnosed with cancer and knowing that he had merely a few months or weeks to live, he dedicated himself to hymn-writing and to writing this book. He lived for a mere forty two days after receiving his diagnosis, and though he was not able to see it to completion, he turned it over to his colleague Philip Ryken who completed it after Boice’s death. In the foreward R.C. Sproul writes of Boice: “Here was a man who not only believed in the doctrines of grace but also loved those doctrines and had fire in his bones about propagating them. I knew Jim Boice for more than thirty years and never saw that fire diminish. His soul was held captive by the doctrines of grace. His ministry was an ongoing doxology to the doctrines of grace because they so clearly manifest the God of that grace…It is not surprising that the last literary work of James Boice would focus on his first love, the doctrines of grace.” This book, then, contains the last words of an eminent pastor, theologian and teacher who dedicated his life to the very topic at hand. It would be foolish for us to disregard such a message.

The book begins with an examination of the current state of the evangelical world and traces some of the history of Calvinism and great Calvinists of the past. The reader is introduced to Arminianism and sees how the two systems of doctrine are at odds. We see how a rediscovery of the doctrines of grace is the antidote to the current sorry state of evangelicalism.

The author then moves to an in-depth examination of each of the five doctrines of grace. Eschewing the traditional TULIP acronym, Boice chooses instead to speak of Radical Depravity, Unconditional Election, Particular Redemption, Efficacious Grace and Persevering Grace. Each of the points receives a full examination, but one that is targeted at the layperson so that even a young person or someone with little theological background could easily understand. Each of the points is supported with Scripture and even the passages that seem to contradict the doctrines are examined and dealt with. As one would expect, the Arminian opposites of each doctrine are considered as well.

The final two chapters speak of rediscovering God’s grace. Calvinism is not a system of doctrine that impacts only the mind. While it is based on theological distinctions, this theology should spur us to action. One who considers himself Calvinist but sees no reason to take the gospel to the world or to be involved in the betterment of society has not truly understood the words of God. The true Calvinist should be a leader in issues of evangelism and social justice.

This book provides a beautiful and captivating introduction to Calvinism. Combined with Boice’s prior volume Whatever Happened To The Gospel of Grace one receives a solid introduction to the doctrines of grace and to the five solas of the Reformation. I recommend this book as heartily as I recommended Whatever Happened to the Gospel of Grace. Both are excellent studies and deserve to be read and appreciated.