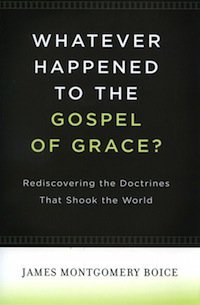 Buy from Amazon Buy from WTS Bookstore
“Whatever Happened To The Gospel of Grace?” is exactly the sort of book you might expect a traditional, Reformed pastor and theologian to leave as his final message to the world, for before this book was published, James Boice, long-time pastor of Tenth Presbyterian Church in Philadelphia went to be with the Lord. This book stands as a call to the church to rediscover the principles upon which the Protestant church was built. It was Boice’s conviction that much of what passes as Christianity today is anything but. The church will only be able to be an effective witness for God when it returns to the foundation of the five solas that defined the Reformation (Scripture alone, Christ alone, grace alone, faith alone, glory to God alone).

The book begins with a critical examination of the modern evangelical church. The author shows that where the evangelical church was once known for and defined by what it believed, today it is increasingly defined by its style. He is especially critical of the church growth movement, saying that this movement adjusts Christianity to the desires of our culture. The modern church does not understand that Christianity can only thrive by offering people not what “they already have, but what they so desperately lack – namely, the Word of God and salvation through Jesus Christ.” His thesis (found on page 36) is that “the chief problem [with the church] is that we have forgotten God and are not really living for His glory…the reason we do not think about Him is that we have forgotten the meaning and importance of these essential doctrines.” The doctrines he refers to are, of course, the five solas.

He turns to an examination of the pattern of this age. He shows how the world’s patterns of secularism, humanism, relativism, materialism and pragmatism have infiltrated the church. Perhaps even worse is the onset of mindlessness where people in the world and in the church no longer use their minds, deliberately choosing ignorance as a way of life. Set against these principles are the absolutes of the Reformation which need to be related to our culture in a new and relevant way.

The bulk of the book is dedicated to an examination of each of the five principles. Each section is a fascinating, Scriptural study. Though he is a theologian, Boice was primarily a pastor and thus a great communicator. He relates difficult principles in a way that the laity can understand and not become overwhelmed.

Having related the principles, Boice spends the final section discussing their application to our worship and to our lives. I found this section disappointing and for a time was almost convinced that it had been written by a different author. Where the first part of the book praised the Reformers, this section lauded the pope and Brother Lawrence. It also seemed to end very suddenly without tying the ideas together and providing a satisfactory conclusion.

Regardless of my annoyances with final section I highly recommend this book. Boice left behind a thought-provoking study of the principles upon which the Protestant church was founded. He provides a respectful but at times necessarily harsh call for churches to re-examine their principles and determine if they truly are living for God’s glory alone.