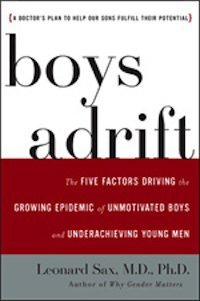 Buy from Amazon
Last week I posted a review of The Death of the Grown-Up by Diana West, a book that takes a hard look at our cultural obsession with immaturity. That review garnered quite a bit of attention, so I thought it might be interesting to go into the archives and pull out a review of another book I read some time ago, one with a fair bit of overlap–Boys Adrift by Leonard Sax. It takes a look at what may well be some of the background to some of this immaturity.

Something strange is going on with boys today. My memories of boyhood revolve around the great outdoors—running through fields with hockey stick guns, climbing trees, playing any and every sport, getting sunburns, heatstroke, ticks, sprained ankles and all the other bumps and bruises guaranteed to come to an active, rambunctious boy. Though today I live in a neighborhood filled with boys, rarely do I see them out and about; rarely do I see them engaging in the activities we’d expect of them. Something has changed. So many boys are inactive and unmotivated.

The changes go deeper than just the activities of young boys. “Fully one-third of men ages 22-34 are still living at home with their parents—about a 100 percent increase in the past twenty years. Boys nationwide are increasingly dropping out of school; fewer are going to college; and for the first time in American history, women are outnumbering men at undergraduate institutions three to two.” This lack of activity or lack of motivation seems to continue through life. Parents, educators and doctors are concerned.

Leonard Sax is a family physician and a research psychologist who has witnessed this change. He has seen it in a close and personal way through his busy medical practice. In his book Boys Adrift Dr. Sax offers his explanation as to why boys and men are failing in school and at home.

He narrows in on five factors: changes in educational models; video games; medications for ADHD; endocrine disruptors; and a lack of good role models. Schools, he says, have begun to focus on academics at too early an age, leaving boys hating education from their earliest days. Programs that focus more on fun and less on academics up to age seven or eight would reap educational dividends. Important also is the distinction between learning as merely collecting facts and learning as experience. Regarding video games he believes that boys today are dedicating far too much time to this form of entertainment. As boys play these games they gain false perceptions of power and inadvertently remove themselves from reality until eventually they prefer the world of video games over the real world. ADHD is vastly over-diagnosed and huge numbers of boys are given medications they simply do not need. These medications have been proven to change the way boys develop and do far more than simply calm down hyperactive children. Endocrine disruptors, and especially artificial estrogens found in plastic bottles and other similar products, are delaying boys’ development (while accelerating girls’ development) and contributing to many associated problems. And finally, boys are suffering from a distinct lack of good and manly role models, both in their homes and in their communities. Each of these five areas receives a chapter-length treatment and in each case the arguments are convincing. Yet the book does not end with only this list of problems, but with the author’s attempts to suggest solutions.

While Dr. Sax does not claim to be a Christian, he shares many things that could easily have their roots in the Bible. For example, in discussing problems with discipline he writes, “Thirty years ago, if a boy cursed his parents and spit at his teacher, the neighbors might say that the boy was a disobedient brat who needed a good spanking. Today, the same behavior from a similar boy might well prompt a trip to the pediatrician or the child psychiatrist. And the doctor is likely to ‘diagnose’ the boy with Conduct Disorder (DSM–IV 312.82) or Oppositional-Defiant Disorder (DSM–IV 313.81). The main criterion for both these ‘disorders’ is disobedient and disrespectful behavior that persists despite parental efforts.’ Is there really much of a difference between a neighbor saying ‘That boy is a disobedient brat,’ and a doctor saying ‘That boy has oppositional-defiant disorder’? I think there is. If another parent whom you trust and respect suggests that your son is a disobedient brat who needs stricter discipline, you just might consider adopting a tougher parenting.” In a similar vein, he writes about problems inherent in making behavioral issues into medical issues. “You can see how the assignment of responsibility differs in these two cases. If your son is a disobedient brat, then your son and you (his parents) have to take responsibility. You have to own up to the problem. You will probably have to make some changes. But if your son has a psychiatric diagnosis, that means he has a chemical imbalance in his brain. He–and you–are no more to blame for that imbalance than if your son were diagnosed with childhood leukemia, right? Psychiatrist Jennifer Harris recently pointed out that today, ‘many clinicians find it easier to tell parents their child has a brain-based disorder than to suggest parenting changes.’”

While Christian readers may find it a bit difficult to read about Dr. Sax’s comparisons between humans and their “primate cousins,” this is one of the book’s few missteps. It is well-researched and thoroughly convincing. Though some of the five concerns Sax lays out may be more important or urgent than others, and while there are many boys for whom only a few of the five will apply, I believe any parent will benefit from reading this book. The lessons he shares are applicable to children who are in public or Christian schools as much as to children who are homeschooled. Al Mohler once called Boys Adrift “essential reading” for parents and I am inclined to agree. If you are a parent blessed with boys or if you are a young man yourself, buy this book and read it. You won’t be sorry you did.

Before I close out, let me share just a couple of other interesting quotes from this book:

“Forty years ago, even thirty years ago, there was no shame in a young man choosing a career in the trades. Beginning in the early 1980s-and particularly after publication of the Nation at Risk report in 1983-a consensus grew in the United States that every young person should go to college, regardless. “Vocational education” lost whatever prestige it had, and came to be viewed in some quarters very nearly as a dumping ground for the mildly retarded.”

“Traditionally, one of the factors driving Western society has been the fact that women prefer successful, affluent men over men who are less successful. Because men understood that women would be reluctant to marry men who couldn’t comfortably support a wife and children, men were motivated to be successful. That simple mechanism has suffered a double whammy in the past forty years. First, sex has been divorced from marriage. Second-and here’s what’s really disturbing to those of us in the over-thirty crowd-sexual satisfaction has been divorced from women altogether.”