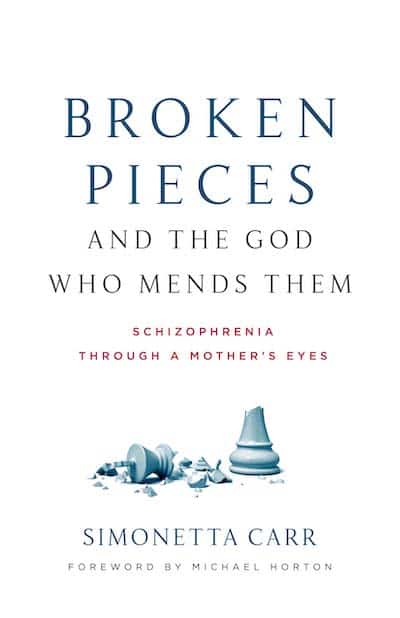 We all suffer in this messy, sin-stained world. Sometimes our suffering is the direct result of our own sin and sinfulness. Sometimes it’s because others sin against us. And then sometimes we suffer through the suffering of those we love. And while it can be difficult or even gruelling to walk alongside a loved one’s illness or disease, there is something particularly trying about enduring another person’s mental illness. In Broken Pieces and the God Who Mends Them: Schizophrenia Through a Mother’s Eyes, Simonetta Carr describes her experience of suffering through her son’s schizophrenia.

When Jonathan Carr was a young university student, he began to experience and display some unusual symptoms. Throughout his life so far he had proven himself clever and able and endearing. He had made a very credible profession of faith and been received into the membership of his church. He had been a loving, affectionate son, brother, and friend. But then, after his first term away from home, he began struggling in many ways. The things that had once been clear to him had begun to become foggy. Behaviors he once rejected he began to embrace. He withdrew from the world both physically and emotionally. He started to exhibit some unusual and then paranoid behaviour. It wasn’t long before he was diagnosed with schizophrenia. His life and the life of his family members would never be the same. Sadly, he would not live to see a cure, or even much progress against his illness, as his illness would eventually lead to his death.

Broken Pieces is first a mother’s memoir as Carr recounts her efforts on behalf of her son. She goes to great lengths—any length, really—to attempt to find him help and healing. She aptly describes the agony of not only the one who is ill, but of those who love him and care for him. She describes the crucial role of the wider support system society offers—from doctors to institutions to police officers—, all of whom are necessary at various times and in various ways. She describes the beauty of the local church as it offers the kind of love and care it uniquely offers. And, of course, she describes the constant love and provision of God through the darkest moments. Though this is a sad and tragic story, it is not without its moments of light.

That is the first half of the book, and it closes with the tragedy of Jonathan’s death. The second half is meant to share some of what she learned through this experience. Though she is not an expert in the field, she committed herself to learning and doing all she could for the sake of her son. Here she provides a guide for those who may encounter a similar situation, or for those supporting others through one. It may prove a helpful starting point to those called to suffer well through the suffering of someone they love.

What is clear through both parts and every page of the book is Carr’s deep faith and firm confidence in her God. Though she would never have chosen to suffer in this way, it is clear that she had prepared herself beforehand through a vital relationship with God and a sound knowledge of him through his Word. This served her well as she entered into this time. And then she witnessed God remain true to his promises even through deep uncertainty and great suffering. Though her book is tragic, it is also inspiring. Though it is painful, it is also hopeful. I was blessed by reading it and expect you will be too.