In some ways it seems like the New Calvinism has been around for a very long time. In other ways, it seems like it’s still a brand new thing. Whatever the case, it has lasted enough now that people are beginning to trace its roots, evaluate its accomplishments, and project its future. While this has mostly been done through books, blogs, and magazines, Les Lanphere has chosen to do it through film. His crowd-funded documentary Calvinist has just been released and provides an interesting perspective on the unexpected rise of Calvinistic theology.

The film follows a simple but effective format. It combines narration, archival footage, and interviews to present the history of Protestantism, the theology of the Reformers, and the roots of the New Calvinism. It features well-known authors and speakers such as R.C. Sproul, Paul Washer, Carl Trueman, James White, Michael Horton, Shai Linne, and quite a few others. Lanphere even interviewed me, so I make a handful of appearances as well. It combines semi-formal instruction with personal accounts of discovering the riches of Reformed theology. It is very obviously positive in tone, rejoicing in God’s work in bringing about this revival of sound doctrine. The whole thing is done to high standards and never the least bit amateurish in its creation or production. It’s both interesting and inspiring. For all of those reasons I recommend it and think you’ll find it both interesting and beneficial.

The trailer aptly displays the quality and tone of the film:

While I enjoyed the film and gladly recommend it, I do anticipate two critiques, both of which I believe are legitimate. The first is the lack of female representation. Though the New Calvinism has mostly been led and spread through preaching (and, therefore, by men) there is little doubt that many women have played key roles as theologians, thinkers, teachers, and popularizers. Unfortunately, they are not represented in the film and the credits include only one woman: Summer White. The lack of female representation tacitly diminishes the important role women have played in the resurgence of Reformed theology and, I am convinced, in its future.

The second critique is that the presentation is very distinctly American. That makes sense: The filmmaker is American and all of his interview subjects (but for myself) are also American. Yet this quietly suggests that the successes and struggles of the movement all around the world are the same as the successes and struggles of the movement in America. From what I have heard and observed, this is not the case. So, for example, the film includes a substantial discussion of issues related to race, but the particular issues discussed are distinctly American. Though other nations may also be experiencing issues related to race, they are of a different nature. I would have liked to have seen the film broadened to include some display of how the movement is spreading far abroad. 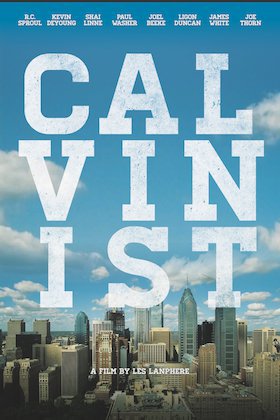 James White says this of Calvinist: “Calvinist will speak to a generation with clarity and force, calling them to a serious consideration not only of the issues, but of the beauty of the theology that is deeply rooted in Scripture and yet seeks to soar into the heavens to declare the glory of God.” I quite agree and hope many will choose to purchase or rent it.